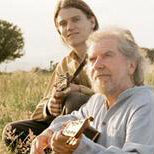 Tommy Sands is a singer, songwriter, and peace activist from County Down, Northern Ireland, who has achieved something akin to legendary status in his own lifetime. His new concert program is based on his most recent album,Arising from the Troubles. The songs on the program will be complemented by Sands' narrative of his first-hand experiences in this sometimes sad, sometimes hopeful, time in Northern Ireland.

From the pioneering days with the highly influential Sands Family, who brought Irish music from New York's Carnegie Hall to Moscow's Olympic Stadium, Tommy has developed into one of the most powerful songwriters and enchanting performers in Ireland today. His songwriting has drawn the admiration of Nobel Poet Laureate Seamus Heaney and father of folk music, Pete Seeger. Sing Out magazine called him "the most powerful songwriter in Ireland, if not the rest of the world."

Tommy Sands (vocals, guitar) often tours with his daughter and son, both accomplished musicians:  Moya (fiddle/vocals/bodhran/whistle) and Fionán (banjo, mandolin). Fionán will be joining his father at Notre Dame. Before joining his father’s tour, Fionán toured with Sinead O’Connor as a guitar tech. His musical influences include everything from Bob Marley to the Chieftans, providing eclectic inspiration to the concerts and adding a fresh edge.

Although constantly performing on stages around the world, Tommy takes pride in taking his music down from the lights. In the United States, he recently taught prisoners in Reno, Nevada, to write their own song with which to defend themselves in court. Back home in Northern Ireland, he completed a CD written with Protestant and Catholic schoolchildren about their own lives in towns and villages. During the Good Friday Agreement Talks, his impromptu performance with a group of children and Lambeg drummers was described by Northern Ireland Deputy First Minister Seamus Mallon as "a defining moment in the Peace Process."

Sponsored by the Kroc Institute for International Peace Studies.

FREE AND OPEN TO THE PUBLIC.