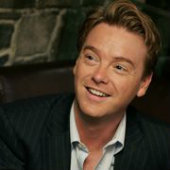 David McWilliams, the popular Irish economist, broadcaster and author, will present his signature brand of insight, humor and enthusiasm to the timely topic of Ireland's place in the world.

Known as the voice who saw the crash coming in Ireland well before it played out, David has written several books describing the effects of the "Celtic Tiger" and its aftermath on a generation of Irishmen and  women.  The Pope's Children (2006), The Generation Game (2007) and The Good Room (2012) paint a devastating picture of the boom and bust through stories of real people and their families - and the consequences these times have for the future of Ireland and her citizens.

An award winning financial commentator, David can be found in a regular column for the Sunday Business Post and frequently can be heard on various media outlets, including RTÉ and BBC.  In an effort to educate beyond formal classroom walls, David has launched an online course "Economics without Borders" to demystify the global economy.

Known for packing the room at his speaking engagements, we are delighted to have David speak as part of The Keough-Naughton Institute for Irish Studies Twentieth Anniversary Speakers and Public Talks Series.