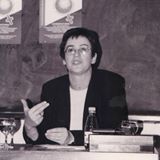 Ursula Barry will present "Economic Crisis, Gender Equality and Austerity: Ireland in a European and Global Context" at noon Monday, March 23 in 424 Flanner Hall.
It is widely recognized that the global economic system is characterized by growing inequality, exacerbated by the recent economic crisis. Austerity became central to public policy in Europe as the financial crisis was converted into a public debt crisis. Barry's talk will ask the question: how has the hard fought for principle of gender equality survived the economic crisis in Europe, and in Ireland? Policies of economic austerity will be explored from a gender perspective and their consequences in generating increasing inequalities, at both global and local levels, will be analyzed.
Ireland was the first EU country to be officially 'in recession' in 2008, followed Greece into a structural adjustment program (known as the 'bail-out' largely dictated by the European Central Bank) and was the first country to emerge from this process to become the fastest growing economy in the EU in 2014. These experiences throw up different kinds of questions about the Irish situation that this paper will address. To what extent have economic and social policies implemented during the recession undermined the fragile commitment to gender equality? How are the benefits of increased economic activity being distributed and redistributed? What have been the impacts of austerity policies on different and vulnerable social sectors?
Ursula Barry is a Deputy Head and Senior Lecturer with the School of Social Justice, University College Dublin, Ireland specializing in gender, equality and public policy. Ursula is the Irish representative on the EU Research Network on Gender Equality and Employment (www.ENEGE.eu) and has been a Senior Expert on the EU Research Network on Anti-Discrimination. Ursula is the editor of, and contributor to, ‘Where are we now – new feminist perspectives on women in contemporary Ireland’ New Island Publishers 2008. Ursula presented a paper on Women and Austerity in Ireland to the International Association of Feminist Economists (IAFFE) Annual Conference in Barcelona 2013 and is joint author with Dr Pauline Conroy of Ch 10 Ireland in Crisis 2008-2012: Women, Austerity and Inequality in Jill Rubery & Maria Karamessini (Eds) Women and Austerity – the economic crisis and the future for gender equality. Routledge 2014.
Sign up for our newsletter