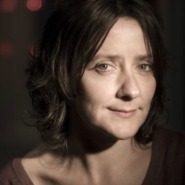 Colette was recently awarded a special prize, in memory of Seamus Heaney, for her book The Whole and Rain-domed-Universe by The Christopher Ewart-Biggs Memorial Trust.  Speaking for the judges, Oxford Professor Roy Foster stated, "We also decided to award a prize in memory of Seamus Heaney, a good friend to the Prize, whose own work did so much to advance the causes for which it was founded. The strikingly assured, subtle and moving collection of poems by the Derry poet Colette Bryce  constitute an utterly appropriate winner for this special award.”  (More)

Also recently short listed for the 2014 Costa Poetry Award for her collection The Whole & Rain-domed Universe, Bryce is regarded as a top Irish poet. In nominating her work to the short list, the judges noted her work was “A deft, important collection – lyrical yet grounded, playful but resonant.”  Bryce won the Cholmondeley Award in 2010.

Born in Derry in 1970, Bryce was a Fellow in Creative Writing at the University of Dundee (2003-05) and then held the North East Literary Fellowship in Newcastle 2005-07.   Having received an Eric Gregory Award in 1995, she published her first collection, The Heel of Bernadette, in 2000. She won the National Poetry Competition in 2003 with “The Full Indian Rope Trick”, which was later voted the favorite winning poem in 2008 in a poll to celebrate 30 years of the National Poetry Competition, and became the title poem of her second collection, The Full Indian Rope Trick (2004). Self-Portrait in the Dark (2008) was her notable third collection.
Sign up for our newsletter