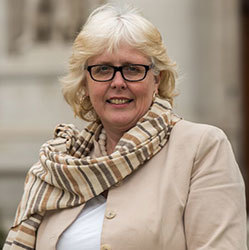 A passionate teacher and an internationally established scholar of early modern Irish history, one focus of Professor Ohlmeyer's current scholarship is Ireland and India. In her talk at the Keough-Naughton Institute, she will address such themes as: similarities and differences in the colonial processes, Irish and British expansionism in the East, and the extent to which Ireland served as a "laboratory for empire" during the early modern period.

Professor Ohlmeyer was the founding Head of Trinity's School of Histories and Humanities, and Trinity’s first Vice-President for Global Relations (2011-14). She was a driving force behind the development of the Trinity Long Room Hub and the 1641 Depositions Project. She served as a Trustee of the National Library of Scotland and the Caledonian Research Foundation, and was a member of the Council of the Royal Historical Society and President of the Irish Historical Society.  She is a Member of the Royal Irish Academy, a member of the National Archives, of the Irish Manuscripts Commission and of a number of editorial boards.  She is a non-executive director of the Sunday Business Post. She has been invited to serve on the Consortium of Humanities Centres and Institutes' international advisory board from 2017 to 2020. Since 2015, Professor Ohlmeyer has been chair of the Irish Research Council.