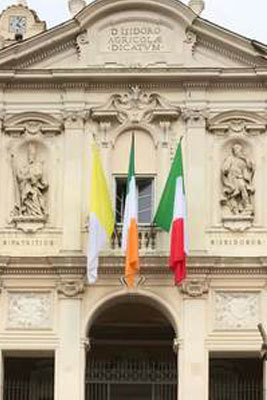 Mícheál Mac Craith, Visiting Naughton Fellow at the Keough-Naughton Institute and a Franciscan priest, will speak on an important aspect of the history of the Collegio S. Isidoro, at which he served as Guardian from 2011-2017.

The oldest Irish establishment in Rome, the Collegio S. Isidoro, was founded by Luke Wadding in 1625. In addition to its primary function  in preparing Irish Franciscan priests for mission in their own country, S. Isidoro soon became the leading European centre for Scotism and the development of the doctrine of the Immaculate Conception, a doctrine much cherished  both by the Franciscan order and by Wadding’s Spanish patrons.

Despite the college’s growing international focus, Wadding never forgot his Irish roots. If he commissioned Andrea Sacchi in 1628, to make a painting of. S. Isidoro, the recently canonised patron of Madrid (1625), for the college church, he was no less insistent in having S. Patrick introduced as an obligatory feast to be celebrated throughout the world in the new universal calendar of the church that was drawn up c. 1630.

This constant balancing of Irish identity and international priorities is the most dominant feature of the artwork of S. Isidoro. The Irish Franciscan conviction, however erroneous, that Duns Scotus, who pioneered the doctrine of the Immaculate Conception, was Irish played a pivotal role in harmonising Irish, Hapsburg and Franciscan interests.