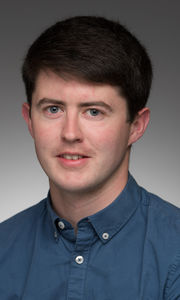 Eugene Costello, the Keough-Naughton Institute's National Endowment for the Humanities (NEH) Keough Fellow for the 2016-2017 academic year, comes to Notre Dame from the National University of Ireland, Galway. Costello earned his doctorate there in 2016 and has served as guest lecturer, seminar leader and fieldwork demonstrator in the university’s Department of Archeology.

Dr. Costello’s research interests lie in historical farming societies and their cultural landscapes, especially in Ireland. His particular research interest is a practice called “booleying,” which is the traditional term used for the seasonal movement of people and cattle between low-lying farms and remote summer pastures in hilly terrain, i.e. transhumance. One of the more distinctive features of booleying culture was that, usually, it was adolescent females who travelled seasonally with the livestock. While previous historical accounts and surveys have failed to elucidate these young women’s experiences, the physical and cultural landscape they inhabited still reflects, in subtle ways, their presence. Calling upon the archaeological traces of their summer dwellings and the stories, songs, and names that booleying people gave to places over time, this culture can, he points out, provide an alternative perspective on rural society and the importance of the young woman within it.

Dr. Costello has authored several peer-reviewed articles, including his most recent publication: “Seasonal settlement and the interpretation of upland archaeology in the Galtee Mountains, Ireland.” Landscape History 37(1), 87-98. He has a peer-reviewed book in publication and has organized or co-organized three conferences.

Dr. Costello will use his time as a fellow to delve further into the practice of booleying as both an economic and social practice. He will seek to document how young female herders used their capacity for independent action—what he calls their “agency”—to translate the social structure of home settlements to summer pasture. He will be particularly interested in findings that the young women either re-created or rejected societal and cultural structures or guidelines—thus probing the much larger question of the relative independence of young women in rural, pre-20th century Ireland. Dr. Costello’s analysis will draw both upon oral history materials in the Irish National Folklore Collection and previous ethnographic work in Irish-speaking south Connemara. He will work most extensively with Keough-Naughton Faculty Fellows Ian Kujit and Diarmuid Ó Giolláin.