Malcolm Sen is an Assistant Professor in the Department of English at the University of Massachusetts Amherst. His research interests include Irish literature, postcolonial studies and the environmental humanities. His research in these fields has been widely published in academic journals and books. His most recent awards include an Elevate Marie-Curie Co-Fund Fellowship at Harvard University’s Center for the Environment. He was the 2012-2013 National Endowment for the Humanities Keough Fellow. 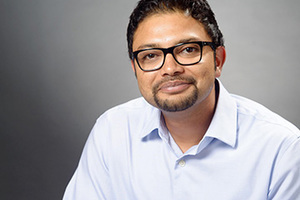 Dr. Sen offered this reflection on the importance of the fellowship to his career:

"The NEH fellowship was awarded to me at a time when the effects of the financial crisis were proving to be especially harmful to Irish Higher Education institutions, of which, the threat to faculty research time was perhaps the most damaging. I was therefore especially grateful for the opportunity that the Keough-Naughton Institute presented. Exceptional research support, collegial and helpful colleagues, a superb and erudite Irish Studies librarian are among some of the defining benefits of this institute.

"As a NEH Keough Scholar I followed in the footsteps of many others for whom this award had marked turning points in their respective careers. While at the Institute, I was able to make significant progress in my research on the forms of environmentalism in Irish literature: a seemingly over-written field but one that was especially difficult to define from the point of view of climate change and the environmental humanities. The scope of the Hesburgh Library and the ability to attend some key conferences on this emergent area strengthened my research framework immensely. The book on the subject, which is currently being written, is far more robust because of those early interventions.

"Other publications that resulted from the award: a co-edited special issue of the journal Textual Practice in which I wrote about ecology and violence. That special issue was nominated by Routledge to be published as a standalone book and saw the light of day in 2016 as Postcolonial Literature and the Challenges for the New Millennium. I launched a podcast series through University College Dublin’s Scholarcast resource. “Irish Studies and the Environmental Humanities” came out shortly after the award and because of my research during it. The podcast series addresses the significant lacunae I found between Irish Studies’ critical frameworks on the environment, and the wider, geo-political forces shaping ecologies and cultures. It has proved to be helpful to many scholars in turn."