Sonja Tiernan, the Keough National Endowment for the Humanities Fellow at Notre Dame during the 2010-2011 academic year, is now Head of the Department of History and Politics at Liverpool Hope University. 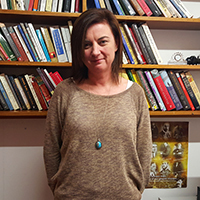 Dr. Tiernan has completed three books on the Irish poet, playwright, and political activist Eva Gore-Booth (1870-1926). The first, Eva Gore-Booth: An Image of such politics ( Manchester University Press, 2012), was researched and written during her NEH fellowship at the Keough-Naughton Institute.

The second, The Poltiical Writings of Eva Gore-Booth (Manchester University Press, 2015), was launched in June 2015 by Professor Declan Kiberd at the Notre Dame Keough Naughton Centre in Dublin.

Her most recent work is The Poetry of Eva Gore-Booth (Syracuse University Press, 2016).

In October 2016, President Michael Higgins delivered a public address on Eva Gore-Booth in London based on Dr. Tiernan's writings.

Dr. Tiernan was invited during the 2015-2016 academic year to Concordia University (Montreal), as the Peter O'Brien Visiting Professor in Irish Studies. At Concordia, she worked with Dr. Jane McGaughey, a previous recipient of the NEH fellowship at Notre Dame.

When asked to reflect on the importance of her NEH fellowship, Dr. Tiernan wrote:

"I received the NEH Fellowship during 2010 – 2011 to research and write a biography on the Irish poet, playwright and political activist, Eva Gore-Booth. During my time in the Keough-Naughton Institute, I was afforded time, space and research facilities which enabled me to complete my research to a high standard. I submitted the complete first draft of my manuscript to Manchester University Press before I left Notre-Dame.  The library facilities for Irish Studies at Notre-Dame are second to none and this enabled me to source material which was previously unavailable to me. The Keough-Naughton Institute has a wonderful collegial environment and I received tremendous support and welcome advice from the faculty and administrative staff.

On completion of my NEH fellowship I was appointed to a permanent lectureship in modern history at Liverpool Hope University. I have no doubt that receiving this award and having a monograph in press helped me to secure my current appointment. My monograph, Eva Gore-Booth: An Image of such politics, was published in May 2012. I was invited to formally present my book to President Michael D. Higgins at a private reception in Áras an Uachtaráin in June 2012. The book is now listed as a Manchester University Press best seller and has received many positive reviews including in the Times Literary Review in August 2012.

The NEH fellowship has had a positive and lasting effect on my academic career. I have remained in contact with many academics attached to the Keough-Naughton Institute, who are leading scholars in their field. During my time in America I delivered papers at various Irish Studies conferences there and have now built up a strong international network."