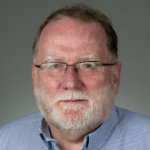 Cathal Goan was born in Belfast and received his University education in University College Dublin where he qualified in Celtic Studies in 1975. He spent two years post graduate in the Department of Irish Folklore UCD before beginning work as a research officer with The Placenames’ Commission of the Irish Ordnance Survey. He subsequently joined RTÉ, Ireland’s national public service broadcaster, as an archivist before becoming first a radio and then a television producer in Current Affairs. In 1990 he became Editor of all RTÉ’s television output in the Irish language and in 1994 he was chosen as the first Chief Executive of the new Irish language television service which was about to be established in Galway. Teilifís na Gaeilge – TG4 – began broadcasting in October 1996 and has gained widespread recognition for the inventiveness and variety of its commissioned programming. In 2000 he returned to Dublin as Director of Television Programming at RTÉ. In 2003 he was appointed Director General (CEO) of RTÉ, a position that he held until January 2011. He was awarded an Honorary Doctorate of Letters by the University of Ulster in 2006 in recognition of his services to the Irish language and to broadcasting in Ireland. He was appointed Adjunct Professor in the School of Irish Language, Celtic Studies, Irish Folklore and Linguistics in UCD in 2011. He has a life long interest in Irish music with particular reference to the Irish language song tradition.