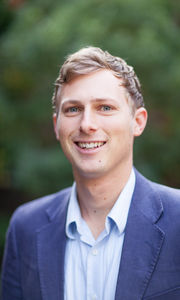 Nicholas, who is affiliated with the Keough-Naughton Institute for Irish Studies, researches historic migration and the influence immigrant communities have on the development of contemporary urban America. He came to Notre Dame from the University of California, Berkeley and entered the University as a Notebaert Fellow, the Graduate School's most prestigious fellowship. His advisors within the Department of Anthropology at Notre Dame are Professors Ian Kuijt, Meredith Chesson, and Maurizio Albahari.

"In my migration studies," he explains, "my focus is on individuals emigrating from western Ireland (primarily County Mayo and County Galway) during the 19th and early 20th centuries. A large number of people emigrated from these two counties during this period in particular, and through the process of chain migration most ended up in the same places as their forebears, essentially re-concentrating and recreating family and community ties in the space of urban America."

Specifically, Nicholas examines what he calls "the materiality of changing community and household formation in Ireland during the end of the 19th century, and how these changes in community are reflected in the make-up of immigrant communities within the U.S."

He conducts research at two sites—in the Louisburgh area of South-West County Mayo, and in Pittsburgh, Pennsylvania.

"My aim is to identify the degree of mutual influence Irish and Irish-American communities have on the development of communities at ‘home,’ and vice-versa, through the exchange of remittances, passage, goods, and ideas. The point is to understand the influence of these historic immigrant communities and their extensive trans-national connections on the social-scape of modern day America through a more anthropological study into the contemporary Irish-American community in Pittsburgh. This latter facet investigates the change in community composition and values over time, as it grew and developed in response to greater investment in the local politics and economics of sociality in the ever-expanding milieu of immigrant communities that make up America today. I hope to be able to expand this work beyond the Irish and beyond the U.S. in order to better understand the ways in which immigrant populations across time have, and continue, to shape the communities in which we live."

"Receiving the NSF-GRFP is an incredible honor," Nicholas adds, "and provides significant external validation for my work and ideas. While the stipend provided by the fellowship gives generous financial security for the next three-years, to have external anonymous reviewers within my field read my proposal and consider my research to have a significant intellectual and socially relevant contribution to society both humbles and inspires me to pursue these questions of the transference of ‘self’ and ‘society’ with even greater zeal. Receiving the NSF-GRFP reinforces the passion I have for engaging in research that has direct impact on contemporary social understanding, and the application of studying the past for engaging with communities of the present, and assessing the implications of historic knowledge towards creating a better future."

As the oldest graduate fellowship of its kind, the GRFP has a long history of selecting recipients who achieve high levels of success in their future academic and professional careers. As stated on the NSF-GRFP website:  "The reputation of the GRFP follows recipients and often helps them become life-long leaders who contribute significantly to both scientific innovation and teaching. Past fellows include numerous Nobel Prize winners, former U.S. Secretary of Energy Steven Chu, Google founder Sergey Brin, and Freakonomics co-author Steven Levitt."