In this centenary year of the Easter Rising, a new book by Keough-Naughton Institute Faculty Fellow Robert Schmuhl, the Walter H. Annenberg-Edmund P. Joyce Chair in American Studies and Journalism, sheds new light on the American connections to this key moment in Irish history.

The title of the book refers to the Proclamation that was read on the first day of the Rising.

“In that document’s second paragraph,” Schmuhl explains, “the leaders of the Rising acknowledge that they were ‘supported by her [Ireland’s] exiled children in America.’”

And there were even greater connections.

“Five of the seven signatories of the Proclamation lived in or visited the States,” he says.  “One—Thomas J. Clarke—was a naturalized American citizen. And de Valera, who went on to become the most dominant political figure in 20th-century Ireland, was born in New York.”

America as “the ATM” of the Rising

Through careful analysis of historical documents found in libraries and research centers in the U.S., Ireland, and Britain, Schmuhl makes the point that while essential decisions related to the Easter Rising were made in Ireland, people in the United States played a significant role before and after the rebellion.

“To a certain extent, America was the ATM of the Rising.” Schmuhl says. “John Devoy surreptiously sent an estimated $100,000—about $2.5 million in today’s currency—to Ireland to purchase arms and other supplies for the rebels.  This support came from ordinary citizens, not the government, often by way of subscriptions of even small amounts.”

It is important to note, he continues, that in 1916, a full one-fifth of the population of the United States was of Irish descent.  Their connection to the homeland was very close—Irish Americans were primarily first-, second- and third-generation immigrants.

“Of course, the great irony,” Schmuhl says, “is that while funding of the Rising itself was, largely, from Americans, you see that after the Rising generous Americans spent even more money to assist the Irish in humanitarian ways.” 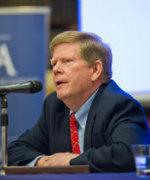 News of the Rising Figured Prominently in American Newspapers

To further illuminate America’s connection to the Rising, Schmuhl also takes up in his book the extent of press coverage in American newspapers of the fateful events of April and May 1916.

“The New York Times devoted 14 consecutive days to front-page coverage of the Rising,” he notes.

That paper’s attentive coverage during World War I can be explained by the fact that so many Irish Americans lived in large cities and had access to metropolitan newspapers, Schmuhl says.  The newspapers were conveying information about the Rising to a prime audience.

“At the Rising’s beginning,” Schmuhl notes, “no one could predict how it might unfold.  Many papers lumped coverage of events in Ireland with coverage of the Great War then being waged in Europe.  Some papers, including the Chicago Tribune, had standing boxes titled ‘European War Summary.’ Within those boxes  readers found highlights of what was happening in Ireland.”

Interestingly, Schmuhl explains, Irish newspapers were operating under wartime censorship, and many did not even appear during the Rising because of the fighting and carnage in Dublin.

“The book documents,” he says, “that Ireland’s censor feared that newspapers from America—or even letters from the States—would reveal to Irish citizens what their own papers were not allowed to report.”

“Robert Schmuhl, a leading American authority on the Easter Rising as well as on the American media, puts students of both Irish and American history even further in his debt in this intriguing and stylish study. Full of acute and astute observations, appraising the relationship between the Rising and the roles of, among others, John Devoy, Joyce Kilmer, Woodrow Wilson and Eamon de Valera, Ireland's Exiled Children adds a fresh dimension to Rising studies.”

Even before its March 1 publication date, the book has garnered much attention in both Ireland and the United States.

Adapted excerpts have already appeared in two special sections of the Irish Independent and in the 1916 commemorative issue of Irish America Magazine as well as on the website Irish Central.

History News Network:  Does Woodrow Wilson Have an Irish Problem, Too?

The Daily Beast: How America Backed the 1916 Easter Rising

Irish America:  Digging Up the Past