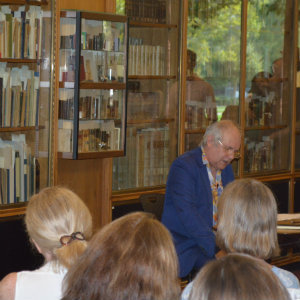 Irish novelist Patrick McCabe drew on his personal experience growing up in Ireland to address the effects of technological development Friday in a talk titled, “Irish Village Life Over 100 Years: From Brass Band to Broadband.”The Keough-Naughton Institute for Irish Studies sponsored McCabe’s talk in the Hesburgh Library’s Rare Books Room.

McCabe quoted the poem, “A Sofa in the Forties” by Seamus Heaney, the recently deceased Irish poet to emphasize the changes that have taken place in society and morality in Ireland over the last century.  He said he agrees with Seamus Heaney and others who argue the core of Irish society always has been the family and the parish, and then the county.

“Everything radiates out from that,” McCabe said. “Familiarity and neighborliness is written into DNA.”

McCabe said his mother’s awareness of everything going on in their neighborhood evidenced that community orientation so dominant within Irish society.

“I thought what a gap exists between [my mother’s awareness] and a person who lived all his life in Wexford town. He could decompose merrily in the Christmas season, right through the spring and not be discovered until St. Patrick’s Day,” he said.

McCabe began said a story from a March edition of the Irish Times demonstrated this decreased sense of community.

“The neighbors decided to pay a visit—they knocked on the door and there was no reply. They opened the door, and the [Christmas] lights were there, wishing the season along its merry way, and there was a skeleton there, sitting in the easy chair,” he said. “And it got me to thinking how times have changed.”

McCabe said he is amazed that in today’s society, “the apotheosis of achievement is eating live bugs and worms on television” and “authority which for so long had held sway was now openly flouted.”

McCabe said modern society is not without God, but a profusion of gods. Quoting G.K. Chesterton, he said, “When man stops believing in something, he starts believing in everything.””

McCabe said he cautions against willingly submitting to a kind of impersonal, godless society, “where the life of the sidewalk and the front yard will have all but disappeared.”

“These are challenging times, and choices will have to be made,” he said.