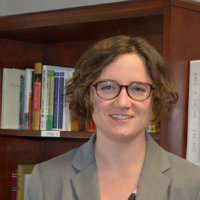 On Friday, Dr. Kasia Bartoszyska, a professor at Bilkent University in Turkey, presented a lecture titled “Ireland Among Others,” as part of the Keough-Naughton Institute for Irish Studies’ Lectures and Public Talk Series.

Bartoszyska, who received her Ph. D. in Comparative Literature from the University of Chicago in 2011, spoke on the significance of Irish literature in a global and transnational context.

“Irish Studies has long had an implicitly comparative dimension, often seeing its cultural output in relation to, and in turn set by, that of its nearest neighbor, Great Britain,” Bartoszyska said. “Recent years have seen an increase in different forms of comparison.

“In examining Irish writing alongside that of other cultures, be that of other colonies, other islands or other predominantly Catholic nations, new geographical coordinates, it is suggested, have the potential to highlight aspects of the tradition that have heretofore received less attention, giving us a new perspective on Irish literature.”

Bartoszyska said she based her lecture on a comparison between two novels, one Irish and one Polish. Bartoszyńska focused on “Melmoth the Wanderer,” written by Irish author Charles Maturin and “The Manuscript Found in Saragossa,” written by Polish author Jan Potocki.

“Focusing on these concrete examples gives us a pathway to the bigger questions by seeing how some of the theoretical paradigms play out in practice,” she said. “They were written around the same time, in the late 18th and early 19th century, and they’re oddly similar to each other in many ways, except that one has a Polish author and the other, an Anglo-Irish one. They are not exactly world-famous classics, but neither are they completely unknown.”

“What ‘Melmoth the Wanderer’ and ‘Manuscript Found in Saragossa’ share is a highly interconnected character structure, where people who have seemingly nothing to do with each other are shown as related in various ways,” she said.

Bartoszyska said it is common for scholars to attribute similarities like these to the similar cultural and socio-political factors present in both Ireland and Poland.

“After all, weren’t both Poland and Ireland countries with extremely powerful neighbors, places that had to struggle to keep their cultures alive in the face of constant threat or even a total loss of sovereignty,” she said. “Didn’t both have a lasting, deep connection to the Catholic Church?”

The connection runs much deeper than superficial characterization, Bartoszyska said.

“As a starting point, we can say that when we compare Polish and Irish literature, we learn that neither is the anomaly it often imagines itself to be,” she said. “In both Polish and Irish Studies, references abound to the uniqueness of each as a dominated region within Europe.”

“Examining the way these two texts create fictional worlds and articulate the relationship between those worlds, and the world, we can begin to consider the question of how they fit in to a more global understanding of literature,” she said.

Studies like hers may ultimately lead to a better conception of literature overall, Bartoszyska said.

“So comparing Irish literature to other traditions, paradoxically, may help us move beyond such narrow comparisons, and to contextualize Irish writing within a more transnational frame,” she said.