The past is never fully decodable—and never was. The rebellion of 1916 was a surprise to the British authorities but it may also have been in some sense a surprise to the rebels themselves. No honest person ever knows exactly what they are doing, or what consequences will flow from their actions. In key moments of history, people are overtaken by forces of which they are but dimly aware. Did any of the men and women who seized the Post office in 1916 suspect that the independence of India might also flow from their deed? Did Hanna Sheehy Skeffington, when she went on hunger strike in a Dublin jail in a 1912 suffragist protest, realize that Mahatma Gandhi would take her act as a model decades later? 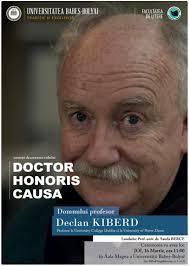 This incisive observation is excerpted from an address at Babeş-Bolyai University in Cluj-Napoca, Romania on March 16th by Keough-Naughton Faculty Fellow Declan Kiberd, Donald and Marilyn Keough Professor of Irish Studies, Professor of English and Irish Language and Literature. It may suggest why the world’s preeminent scholar of modern Irish literature was recognized that day by the university with an honorary degree of Doctor Honoris Causa.

In a ceremony at the university’s impressive Aula Magna, Professor Kiberd was honored for his outstanding contributions to Irish Studies as well as his assistance 17 years ago in establishing Irish Studies at Babeş-Bolyai University.

Dr. Sanda Berce, Professor of English and Irish Literature at Babeş-Bolyai University, delivered the Laudatio, in which she noted that through his award-winning works, including Inventing Ireland: The Literature of a Modern Nation (Harvard University Press, 1995) and Ulysses in Us: The Art of Everyday Living (Faber and Faber, 2009), Professor Kiberd “examines the assumption that an author has to have an international or global consciousness, and finds that it is precisely the Irish space and context that provide the value of a writer’s work . . .it is cultural geography that gives value and significance to the work: ‘being Irish means being modern.’” 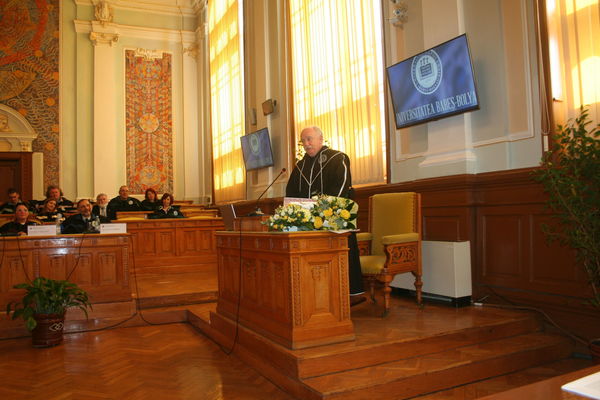 Notre Dame’s faculty delegation included two Institute faculty fellows: Mary O’Callaghan, Assistant Teaching Professor of Irish Language and Literature, who lectured on the role of the Irish language in the national education system, past and present; and Diarmuid Ó Giolláin, Professor of Irish Language and Literature and Concurrent Professor of Anthropology, who gave a lecture on the history and sources of Irish folklore. All three Notre Dame professors held sessions with students in the university’s two-year master’s program in Irish Literature and returned to campus with many ideas about future collaborations in Irish Studies between the two universities.

When asked to reflect on the resonance of Irish Studies in Romania, Professor Kiberd observed:

“The Romanians, like the Irish, feel a strong sense of identity—but are also familiar with the experience of being defined and described by others. They are sophisticated, multi-lingual and intercultural—but also feel themselves to be on the edge of Europe. They see the European Union as a reassuring force in a fragmenting world—and perhaps look to Ireland as an example of how to be national and European at one and the same time. Of course, there is a sizeable Romanian community in Ireland now, whose members are valued for their intelligence, industry and openness. There is a mixture of folk wisdom and cutting-edge modernity in their thought. When you visit some countries, you think, “These people have a great past”; but in Cluj, you also think, “This place has a great future. It will be even more interesting ten years from now—such is the energy, audacity, and graciousness of the people.” 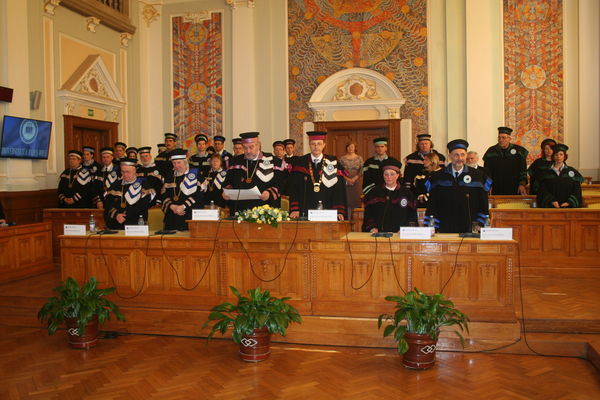