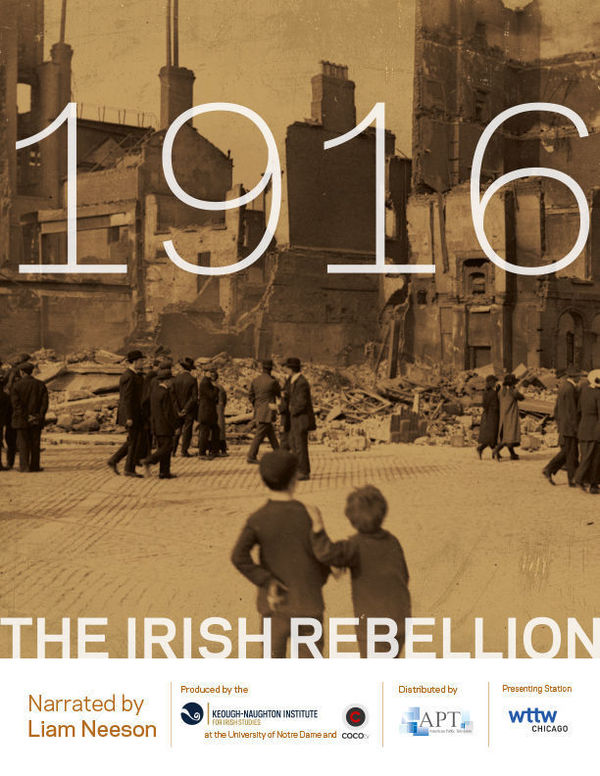 The Keough-Naughton Institute's documentary, 1916 The Irish Rebellion, continues its travels around the world.

This past spring, the three-part documentary was broadcast in Ireland, the United Kingdom, France, and the United States, as well as in other countries and on Aer Lingus.

An additional 80 screenings of the feature-length version (86 minutes) occurred in locations around the globe, including Belgrade, Moscow, Riyadh, Sarajevo, and Tokyo. These screenings were held at embassies, film festivals, theatres, and other venues.

A generous donor has funded the Reframing 1916 initiative, which--in partnership with the Irish government and leading universities worldwide--brings select Notre Dame faculty to museums, institutions, and universities with an Irish Studies presence to engage with their faculty, students, and the public in a scholarly response and reassessment of the seminal events of 1916.

The Fall Reframing 1916 tour launches this week in Buenos Aires, as part of Irish Studies Symposium, "The Irish in Latin America," hosted by the Escuela de Lenguas Modernas at the Universidad del Salvador.  Panelists there include:

Proceedings of "The Irish in America" will be broadcast live, with the discussion about 1916 The Irish Rebellion beginning at 16:30.

The tour will continue on in Paris, Montreal, New York City, Boston, western Massachusetts, Connecticut, Notre Dame's Rome and London Global Gateways, Monaco, Dublin, Budapest, Prague, the University of Cambridge, the University of California at Berkeley, and the National World War I Museum and Memorial.

See all past and future 1916 Reframing Events and screenings.