Cultural Landscapes of the Irish Coast 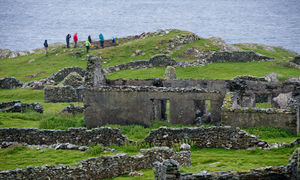 There are many ways to understand a culture and its history.

One way is to study political and heroic figures, or the broad sweep of cataclysmic events.

Another is to look at everyday people and their lives—and then use discoveries and insights to illuminate a specific community’s or culture’s past, and as a lens for broad, universal themes.

Within this second mode of research and learning, Keough-Naughton Faculty Fellow Ian Kuijt, Professor of Anthropology, is leading a multifaceted and multidisciplinary effort off the west coast of Ireland called Hidden Histories: Cultural Landscapes of the Irish Coast (CLIC).

“There is a massive amount of research focused on the urban and the political,” Kuijt says, “but there are also huge swaths of Irish history and culture that are greatly understudied and thus not well understood.”

He calls the CLIC project an effort to shine a light on “hidden histories” and “soft footprints.”

Captivated by the Connemara Islands Inishark and Inishbofin

While Kuijt’s training and early research focused on the Middle Eastern Neolithic period, for the past ten years he has devoted himself to the history and culture of two island communities off the Connemara coast: Inishark, a fishing village abandoned in 1960 but with many houses and buildings–in various states of ruin—remaining, and Inishbofin, at its peak in the 1840s the home of 300 residents—now empty. 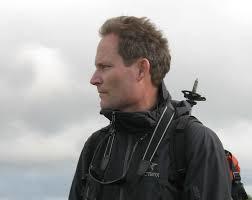 The multifaceted CLIC project began in 2006—sprung from a flash of inspiration on Kuijt’s part that a multifaceted, multidisciplinary project spanning the centuries would transform our understanding of changing rural and coastal life. Generous funding from Ireland Council members John and Mary Beth Tynan gave it life.

The project draws upon archaeological and archival research, oral history, and video ethnography to document life on Inishark and Inishbofin from the Bronze Age to the present day—and includes research on residents and their descendants who moved to America.  Additional and significant funding through the years has been through the Keough-Naughton Institute for Irish Studies as well as Notre Dame’s Institute for Scholarship in the Liberal Arts, Office of Research, and Nanovic Institute for European Studies.

While the core of CLIC is study of the expansion of Christianity in the early medieval period (the 6th through the 12th centuries) and the archeology of the Irish Famine (19th and 20th centuries), there are several facets to the project:

The over-all project is perhaps best understood by the beautiful and haunting films created by CLIC senior researcher Bill Donaruma, Teaching Professor in Filmmaking in the Department of Film, Television, and Theatre at Notre Dame and Director of the Center for Creative Computing. These short videos and 19 others are available through an ingenious fusion of print and video in the book Island Places, Island Lives, in which readers can use a smartphone or tablet to hover over a photograph in the book and so activate a corresponding video.

“The work of Professor Kuijt and his team has brought a much-needed dimension to the teaching and research mission of the Keough-Naughton Institute,” says Institute Director Christopher Fox. “Their work has also provided a model for how Notre Dame can engage with local communities in Ireland and learn from them.”

A Unique Team of Researchers

The CLIC team is unique in its melding of Notre Dame faculty members, doctoral students at Notre Dame and other institutions, Notre Dame undergraduates, and professional archeologists.

In addition to Kuijt and Donaruma, a senior researcher from Notre Dame is Meredith Chesson, Associate Professor of Anthropology, whose research focuses on the materiality of daily life in the past in such diverse societies as Jordan, Canada, United States, Cyprus, Israel, Ireland, and Italy. 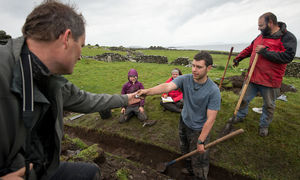 Even if they are not currently involved in CLIC, Kuijt is justifiably proud that of the many Notre Dame undergraduates involved with the project, 39 have gone on to earn master’s, doctoral, and medical degrees.

Inishark and Inishbofin as a Lens onto Broader Themes: Migration, Hunger, Resiliency

The histories Kuijt and his team are uncovering, reconstructing, and chronicling speak to broad, global themes.

“Migration, hunger, and resiliency,” are three global themes Kuijt identifies as integral to the CLIC project.

The studies and explorations of the team pertain both to the “worlding” of Irish Studies and how individual, often “hidden” histories, illuminate the global.

“Migration is a very powerful lens for the study of local and global issues,” Kuijt points out.

Within this theme, Kuijt and Donaruma have a new film, Nets of Memory (Líonta na Cuimhne), which tells the story of multiple families and their relation to a simple fishing net—not merely an economic tool, or object but a point of entry into the emotional landscape of memory and belonging as individuals negotiate the migration process. They will show the film at various conferences this coming winter.

“We talk frequently about hunger and its devastation,” Kuijt says, “but through CLIC, we are focusing on the positive as well. Multiple times, the people of Inishark and Inishbofin have faced extreme economic hardships; yet, their history tells a powerful story of living. Documenting--and contemplating—both the hardships and the successes are important to all of us as anthropologists, filmmakers, and human beings.”