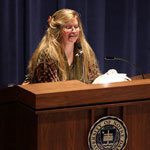 Nuala Ní Dhomhnaill, renowned Irish poet, will give a poetry reading Thursday, September 19th at 4:00 PM in the Rare Books Room, first floor, Hesburgh Library.  She joins the Keough-Naughton Institute this fall as a Distinguished Professor of Irish Poetry and Naughton Fellow.  While at Notre Dame, she will teach a course on Modern Irish Poetry.

Nuala is regarded among the most gifted Irish poets-- writing in Irish or English -- since William Butler Yeats and her poetry has been translated into many different languages including: English, French, German, Italian, Polish, Norwegian, Estonian, Danish, Czech, Armenian, Breton, Swedish and Japanese. Raised in the Dingle Gaeltacht and in Nenagh, County Tipperary, she received her B.A. from University College Cork and has received honorary doctorates from Dublin City University and University College Cork. Ní Dhomhnaill has teaching and lecturing experience in Ireland, England, Turkey, Canada and the United States. She was awarded the prestigious Ireland Chair of Poetry which brought her as Poet-in-Residence to Queens University, Belfast, Trinity College Dublin, and University College Dublin and has also served as artist/writer in residence at University College Cork and St. Patrick’s College of Education.  She was Ireland Professor of Poetry from 2001–2004.  Her stateside appointments include serving as a Visiting Professor at Smith College, New York Univeristy, Boston College and Villanova University. Ní Dhomhnaill is also a regular broadcaster on radio and television in Ireland. Her poetry collections include: An Dealg Droighin (1981), Rogha Dánta/Selected Poems (1986, 1988, 1999), Pharoah’s Daughter (1990),The Astrakhan Cloak (1992) and The Fifty Minute Mermaid (2007). She is also the author of several plays for children, librettos, screenplays, and essays.