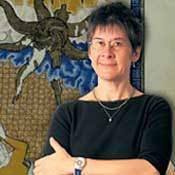 Lisa Bitel, Professor of History and Religion at University of California and widely-published medieval historian and gender studies scholar, presents a lecture on Friday, October 11th at 3:30 PM in 424 Flanner Hall.   Her talk, entitled “Knock, Knock, Who’s There? Joe Coleman and his Angry Apparition,” is about the modern discernment of visions in an Irish context. Professor Bitel will be discussing Joe Coleman, “the would-be Christian visionary who was very popular a couple of years ago after he summoned the world to meet the Virgin at Knock, Ireland.”

The talk is related to her forthcoming book, Lady of the Rock: Vision and Religion in the Modern American Desert, about a modern Marian visionary in the Mojave Desert. Professor Bitel began her study of contemporary visionaries as an exercise in ethno-historical method: “I first went out to watch this Californian Marian visionary in order to understand the behavior of medieval witnesses to medieval vision events,” and this fieldwork will inform her research as she returns to early medieval visionaries and visions in her next project. Lisa Bitel’s monographs include Landscape with Two Saints : How Genovefa of Paris and Brigit of Kildare Built Christianity in Barbarian Europe; Land of Women : Tales of Sex and Gender from Early Ireland; and Isle of the Saints: Monastic Settlement and Christian Community in Early Ireland.

She has taught numerous classes on Medieval Ireland and is Director of Monastic Matrix, a resource for the study of woman's religious societies from 400 to 1600 CE, as well as Director of Interdisciplinary Research Group, Center for Religion and Civic Culture.  Professor Bitel is currently working on Lady of the Rock: Vision and Religion in the Modern American Desert, a monograph on modern religious vision event in southern California, with photographer Matt Gainer (forthcoming, Cornell University Press.)