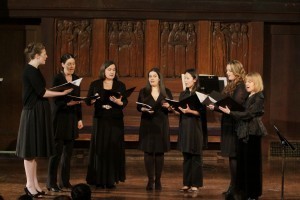 CANTORAL will perform a program of chant designed in the form of a sonic triptych.  The triptych form emerged from early and medieval Christian art as a means of representing multiple themes and characters, surrounding a central image. CANTORAL is an all female vocal ensemble from the University of Limerick, Ireland.  The ensemble was formed in 2008 as the Irish World Academy of Music and Dance.  The ensemble specializes in Western plainchant and early polyphony, with a particular interest in medieval Irish repertoire.