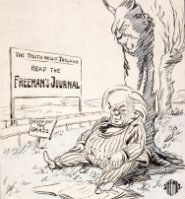 Felix M. Larkin presents a lecture on October 29th at 4 PM in 424 Flanner Hall.  Felix is chairman of the Newspaper and Periodical History Forum of Ireland. A retired public servant, he now works as a historian and freelance writer. He has published extensively on the press in late 19th and early 20th century Ireland. His publications include Terror and discord: the Shemus cartoons in the Freeman’s Journal, 1920–1924 (Dublin, 2009), and he edited Librarians, poets and scholars: a Festchrift for Dónall Ó Luanaigh (Dublin, 2007). Lawyers, the law and history, a volume of essays which he co-edited (with Professor Norma Dawson, of the Queen’s University, Belfast) for the Irish Legal History Society, was published this summer. He was academic director of the 2013 Parnell Summer School, the theme of which was ‘Parnell & Kennedy: Lost Leaders’, held at Parnell’s ancestral home, Avondale, Co. Wicklow, 11–16 August 2013.

‘Artistic bombs’—that’s how the Shemus cartoons were described in the Irish parliament in 1923. Published in Dublin’s Freeman’s Journal newspaper between 1920 and 1924, they were remarkably hard-hitting comments on the events of that period. During the War of Independence, they targeted the increasingly brutal nature of British rule in Ireland. They later attacked the new government of Northern Ireland and the republicans who opposed the Anglo-Irish Treaty of 1921. The cartoonist was an Englishman, Ernest Forbes (1879–1962), who went on to enjoy some success as an artist in London and in his native Yorkshire. His work for the Freeman’s Journal gives a most unusual angle on the history of the period in question. Felix Larkin will present a selection of the best of the cartoons, with a general introduction to Forbes and his work and some explanatory comments on individual cartoons.