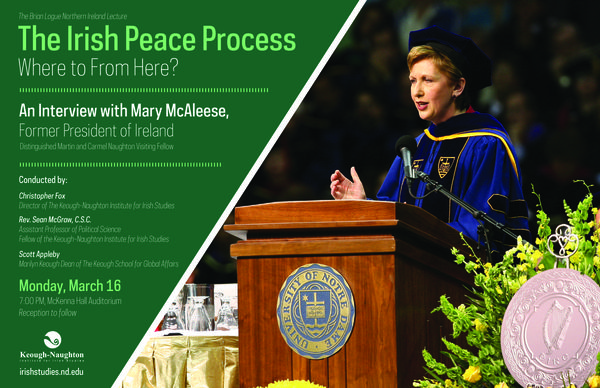 The Keough-Naughton Institute for Irish Studies announces an interview with Former President of Ireland Mary McAleese as she considers "The Irish Peace Process - Where to From Here."  In an interview format with Rev. Sean McGraw, C.S.C., Assistant Professor, Political Science, Scott Appleby, Marilyn Keough Dean of the Keough School of Global Affairs and Christopher Fox, Director of the Keough-Naughton Institute for Irish Studies, Mrs. McAleese will discuss the current state of the Northern Ireland peace process and its future path.

Mary McAleese joins the Keough-Naughton Institute for Irish Studies this spring as the Distinguished Martin and Carmel Visiting Scholar.

Mrs. McAleese served as the eighth President of Ireland, 1997 – 2011, and was the first Irish President born in Northern Ireland.  A graduate of Trinity College Dublin, she received her law degree from Queen’s University Belfast. Prior to her distinguished term as President, she held several positions in higher education, including Reid Professor of Criminal Law, Criminology and Penology at Trinity College Dublin and Director of the Institute of Professional Legal Studies and Pro-Vice Chancellor at Queen’s University Belfast.

Mrs. McAleese described the theme of her Presidency as "Building Bridges”, which was reflected in her efforts towards reconciliation and peace building with Northern Ireland.  Her ideas and work in this arena were presented  in Love in Chaos: Spiritual Growth and the Search for Peace in Northern Ireland; President Mary McAleese: Building Bridges - Selected Speeches and Statements (forward by Seamus Heaney).

Following her Presidency, Mrs. McAleese pursued a Doctorate in canon law from Gregorian University (Rome); her studies resulted in Quo Vadis?: Collegiality in the Code of Canon Law, which was released in 2012.

Current appointments include Chairperson of the European Union High Level Group on the Modernisation of Higher Education and Patron of Margaret Beaufort Institute of Theology in Cambridge, England, which promotes education and formation of lay Catholics, particularly women, for Christian discipleship and ministry.