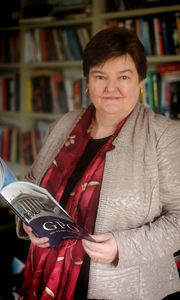 Her topic: "'Our likes will not be seen again': Aspects of Irish-Language Autobiography."

Professor Nic Dhiarmada is originator, writer, producer, and executive producer of the award-winning, multipart documentary series on the Easter Rising, 1916 The Irish Rebellion, and its 86-minute feature version, both narrated by Liam Neeson, that were broadcast and screened internationally throughout 2016 and 2017.

1916 The Irish Rebellion received the award for "Best Documentary Series" at the 2016 Irish Film and Television Academy's gala awards ceremony in October 2016, as well as American Public Television’s Excellence in Programming Award, which followed announcements of the film as winner of the “Silver Saber Award” at this year’s International Historical And Military Film Festival in Warsaw, Poland.

Professor Nic Dhiarmada is the author of the companion book The 1916 Irish Rebellion, published by the University of Notre Dame Press.

A film about the life of Professor Ó Buachalla will precede the lecture and a reception will follow it.