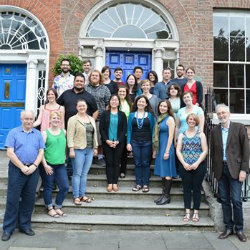 An annual event since 1999, this year participants explored the theme of “The Vernacular Imagination”, during a period of exceptionally fine Irish summer weather. Chair Diarmuid Ó Giolláin, with support from the Keough-Naughton Institute for Irish Studies at the University of Notre Dame, brought together a program of leading scholars and noted writers for the benefit of international graduate students.

Explains Ó Giolláin, "the word vernacular is partly synonymous with folk, popular, traditional, and indigenous, and it stands in implicit (and often idealized) opposition to the learned, urban, or modern. The question of the vernacular has been crucial to Irish modernism, whether in the movement to revive the marginalized vernacular language, or in the engagement of key figures with the vernacular tradition, such as W.B.Yeats, Lady Gregory and John M. Synge."

Each year’s seminar offers participants the opportunity to meet prominent writers, who give readings from their work and participate in a question-and-answer session afterwards. This year the poet Paul Muldoon formally opened the seminar with a reading from his work to a capacity crowd, setting a high note for the program to come. The novelists Pat McCabe and Deirdre Madden also gave readings while the bilingual novelist and short story writer Éilís Ní Dhuibhne gave an academic paper on the relationship between folklore and literature in 20th century Ireland. The seminar ended with a reading to a capacity crowd by the novelist and short story writer Kevin Barry.

Each invited speaker engaged with the theme in his or her own way. Notre Dame professors Declan Kiberd, Donald and Marilyn Keough Professor of Irish Studies and professor of English and leading international authority on the literature of Ireland, both in English and Irish spoke of “The Language of Synge” while Patrick Griffin, Chair and Madden-Hennebry Professor of History referred to his work on the intersection of colonial American and early modern Irish and British history in the lecture “Provincial Cultures in the Atlantic World.”

"The idea was to concentrate the more literary presentations in the first week and the more historical ones in the last, with those papers that engaged in some way with ethnographical method linking the two. The fact that the speakers, from very different scholarly backgrounds, so conscientiously engaged with the seminar’s theme led to some interesting and felicitous juxtapositions," says Ó Giolláin.

The piper, song collector and broadcaster, Séamus Ennis, subject of the folklorist Ríonach uí Ógáin’s paper, was referred to the following day by the literary scholar Clair Wills in her paper on Irish migrants in post-war England, who listened to his broadcasts on the BBC.

Neil Buttimer’s paper on the 19th century Gaelic diarist Amhlaoibh Ó Súilleabháin’s rewriting of the life of St. Patrick in a way consistent with the contemporary Catholic ‘devotional revolution’ was answered the following day by Amy Mulligan’s paper on the famous medieval tale Acallam na Senórach in which St. Patrick debates with a pagan figure who praises the values of the vanished pagan world.

The literary papers in the first week looked at the relationship between literary texts and vernacular languages and cultures, not just in the work of the great Irish modernists, but also in writers such as Swift (Chris Fox), Maria Edgeworth (Clíona Ó Gallchóir) and Gerald Griffin (Claire Connolly). Other related papers looked at vernacular histories, whether in opposition to official histories (Henry Glassie), or deliberately forgotten (Guy Beiner), or the result of both scribal and oral transmission (Vincent Morley).

One of this year’s participants wrote positively that the seminar for her raised many more questions than answers, and this ought to be the measure of its success as an intellectual endeavor.

Next year, demonstrating the reach of Irish Studies, the seminar will move across to this side of the Atlantic and beyond the equator to Buenos Aires, to discuss the theme of “Peripheral Modernities? Ireland, Argentina, Latin America”.