The Dublin summer internship program has long been a hallmark of the Keough-Naughton Institute for Irish Studies.  Under the direction of an internship coordinator at Keough Naughton Notre Dame Centre, the University’s Dublin global gateway, rising seniors work with partner organizations based on their intellectual passions, individual expertise and career ambitions. 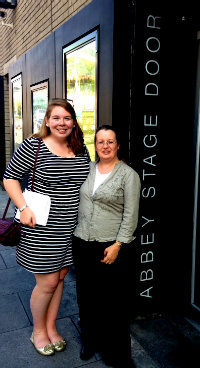 Beyond the invaluable work opportunities, students are exposed to Irish culture through a variety of experiences. This summer, funded through the generosity of members of the Ireland Council, eleven students were interns in placements ranging from arts organizations, Irish governmental agencies, the Institute’s 1916 documentary project and independent study.

English major Katie Clark spent her summer with the Abbey Theatre Archives preparing collections of press clippings and other paperwork for digitization through the Abbey's partnership with National University of Ireland Galway. “I am so honored to have worked with an institution as monumental as the Abbey, especially given its influential role in history over the past 110 years. It was an amazing opportunity and I am so thankful to the Keough-Naughton Institute for making it possible!”

Emma Venter, an English major, worked as a research assistant this summer for Donald and Marilyn Keough Professor of Irish Studies Declan Kiberd and P.J. Mathews, University College Dublin, as they compiled and edited The Handbook of the Irish Revival for the Abbey Theatre. The publication examines the cultural effects of the Irish Revival period. She also acted as an official intern of the Abbey Theatre, working with the literary and marketing departments at the Theatre.

“I had a wonderful summer working on The Handbook of the Irish Revival. This was my first experience as a research assistant, and the guidance and support I received from my professors as well as the Abbey Theatre was excellent. I learned so much from this project and I'm really pleased to be invited to continue my research for this project throughout the year.”

Caelin Miltko, an English major, worked at the National Folklore Collection at University College Dublin, depository of Irish oral and ethnological materials. Currently, the Archives are digitizing a number of their collections and Caelin worked to digitize their photo collections. She gained additional experience working in the sound archives, preserving old copy books, and helping researchers find the proper materials.

Of his placement with the Reconciliation Fund in the Anglo-Irish Division of the Department of Foreign Affairs and Trade of Ireland, political science and history major Patrick Valencia says, "My experience interning in Ireland this past summer was fantastic. Not only did I learn about the North-South conflict, I also learned so much about the country and the people by assimilating into Irish life as a member of the workforce. I had the opportunity to work and interact with Irish people every day, which only added to the wonderful experience of living abroad with other fellow Notre Dame students."

History and English double major Patrick Butler worked in the Press Office at the Department of Foreign Affairs. His responsibilities included the co-ordination of all media for major state visits to Ireland by foreign dignitaries, notable examples being that of the President of Mozambique, and a Chinese delegation. He also conducted research for his senior history thesis on Social Democratic and Labour Party leader John Hume and his role in mobilizing the American government to support the Northern Irish Peace Process, interviewing several key Irish diplomats and politicians through his internship at the Department of Foreign Affairs.

Emily Voorde, a political science major, conducted independent research to be incorporated into her senior thesis. Her time was dedicated to examining the perception of and barriers to ratification of the United Nations Convention on the Rights of Persons with Disabilities in the United States and in Ireland. “This issue is particularly relevant considering that both countries are part of a small minority of signatories that have yet to ratify the treaty. While in Ireland, I spoke with policymakers, non-profit organizations, service providers, personal advocates, and individuals with disabilities in order to compile information on the issue.”

Says Psychology and pre-professional studies major Molly Kenney, "this summer was an incredible experience for me overall.”  I learned so much about psychology and research while fully immersing myself in the Irish culture. There is no better way to learn about a country than working with the people every day."  Molly worked with Dr. Gary O'Reilly, a professor of psychology at University College Dublin, who is developing a computer game and smart phone application for Child Cognitive Behavioral Therapy. She developed a target audience list of American health professionals and helped create an American version of the materials.

Hesburgh-Yusko Scholar and sociology major Katie Brennan was an intern on the Keough-Naughton Institute’s 1916 Documentary. Her internship involved all aspects of production, including researching, compiling and transcribing archival film footage, scouting filming locations, assisting with office duties and on shoots, and creating and producing a behind-the-scenes making-of documentary.  “Although I'd spent time in Dublin previously, I felt as though I got to know the city and the country of Ireland in a new and different way. Overall, my experience as a summer intern in Dublin was incredibly fulfilling and one which will stay with me for the rest of my life!”