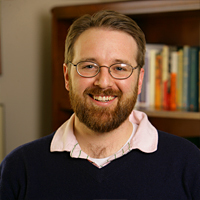 James W. “Wes” Hamrick, a former graduate student in the Department of English, has been awarded the National Endowment for the Humanities Keough Fellowship. Hamrick received his Ph.D. in English from the University of Notre Dame in January, 2013.

Hamrick will use the Fellowship to expand upon his dissertation “From Gaeltacht to Grub Street: The Eighteenth-Century Public Sphere in a Four-Nations Context.”

“My dissertation looks at the interaction between manuscript and print culture in England, Scotland and Ireland during the eighteenth century and argues that the so-called ‘public sphere’ during this period, while dominated by English, is in fact multi-lingual, with significant roles played by writing in Irish and Scots Gaelic as well as Scots English," Hamrick explains.

The NEH Keough Fellowship is highly selective and enables an outstanding scholar to continue his or her research while in residence in the Keough-Naughton Institute during the academic year 2013-2014.  The Fellowship was established with support from a 2.25 million NEH Challenge grant in 1998. This is the first time the Fellowship was awarded to a Notre Dame graduate student or faculty member. The Fellowship is open to scholars in any area of Irish Studies, granting a stipend of $50,000.  In addition, Fellows are provided an office in the Keough-Naughton Institute and will be integrated into the Institute's life, with full library privileges and access to the Institute's research tools.

Past Fellows have published acclaimed books on varied subjects within Irish Studies. During his fellowship year, Hamrick plans “to revise my dissertation for book publication and begin work on my next project which examines how translation and bilingualism allowed Irish and Scots Gaelic literature and culture to inform the development of British Romanticism.”

Hamrick received a B.A. in English and Economics from Brown University in 1998 and an M.A. in English from the University of Vermont in 2004 where his thesis was “Edmund Burke and Eighteenth-Century Ireland.” Other honors include an Eli Lilly Presidential Graduate Fellowship, 2005-2010, and an English Graduate Teaching Fellowship 2010-2011, as well as numerous grants to study Irish and travel to Ireland.

Hamrick speaks and reads both Modern Irish and Scots Gaelic.  He has given several presentations and invited talks on Eighteenth Century Scotland and Ireland, and assisted in teaching undergraduate classes on Irish Literature.

In addition, his essay “‘And in retirement, I can bless the shade”: Trees and Politics in Anne Finch’s Jacobite Poems of Retreat” will be published by Studies in English Literature this summer.  Other publications include “Hard News, Messianic Visions: Scribes in the Public Sphere,” in Saints, Sinners and Scribes in the Celtic World, edited by Associate Professor of Irish Language and Literature Brian O’Conchubhair. (2013).