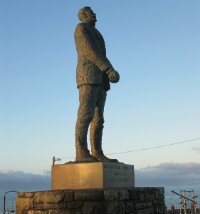 The University of Notre Dame and the University of Limerick recently collaborated to present a three day conference on the legacy of Roger Casement in Tralee, County Kerry, Ireland. Attracting scholars from North America, South America, and Europe to the spot where Casement, a global humanitarian and international political figure, was arrested for importing guns into Ireland as part of the 1916 Irish Rebellion, the conference examined the global and local impact of this controversial figure.

Organized by Brian Ó Conchubhair, Associate Professor of Irish Language & Literature and Keough-Naughton Fellow, the conference explored Casement’s life and times and his engagement in Irish and transnational affairs and issues through a wide variety of mediums – including lectures, interactive tours, photo exhibits, musical and theatrical performances, and dramatic readings.

Mayor of Kerry Cllr. Seamus Cosaí Mac Gearailt welcomed delegates to the conference and launched two photo exhibits – one celebrating Casement’s legacy in Kerry and another his human rights work in Brazil. The exhibits were sponsored by the Kerry Library, the Universidade de São Paulo, Brazil, and the Irish Department of Foreign Affairs and Trade.

Notre Dame’s Robert Norton, Associate Vice President for Academic Affairs and Research, officially opened the conference and introduced former Keough-Naughton NEH Fellow John Gibney, who presented a detailed and fascinating counter-factual account of how the course of Irish and even world history might have been altered had Casement’s German guns arrived in time for the 1916 Rising. Drawing on a range of archival sources and contemporary testimonies, Gibney posited an alternative version of the rising, in which the arrival of weapons for the Republican forces held out the prospect of protracted (if uncoordinated) guerilla campaigns in the west of Ireland. This scenario might, in turn, have served to distract and possibly weaken the British war effort in Europe in the weeks prior to the crucial Somme offensive, with potentially far-reaching consequences.

Schmuhl traced the depiction and portrayal of the 1916 Rising, the counter-attack and the leaders' executions as reported in North America by US newspapers such as the New York Times. Focusing in particular on Casement and his depiction in the United States as the Rebellion’s ring leader, he brilliantly traced Irish-American efforts, reaching as far as the White House, to have Casement’s death sentence commuted. Detailing the various efforts and intrigues involved, Schmuhl revealed the dramatic last minute politics which ultimately came to nothing as Casement was executed for high treason.

Conference delegates toured Casement sites throughout Kerry, including Ballyheigue, Banna Beach Memorial, and Casement fort, the site where Casement was arrested in 1916.  Irish musician Michael Brunnock provided a musical interpretation with music inspired by Casement’s life, with songs from his forthcoming tribute album to Casement. 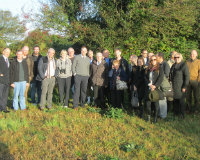 Two theatrical performances were incorporated including Zyber Theatre group’s premiere of Remember Casement, a new play specially commissioned for the conference. The conference concluded with Michael Griffin, head of the English Section at the University of Limerick, introducing Patrick Mason (Former Artistic Director, Abbey Theatre), who offered a stunning and moving performance of his play The Dreaming of Roger Casement.

The conference was well attended and reviewed, and the result of a great collaboration with many institutions and individuals.  Roger Casement, while still controversial, is certainly better understood.