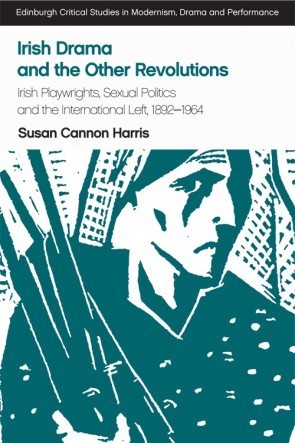 Faculty Fellow Susan Cannon Harris is the author of a new book: Irish Drama and the Other Revolutions:Playwrights, Sexual Politics and the International Left 1892-1964 (Edinburgh University Press 2017), part of the series Edinburgh Critical Studies in Modernism, Drama and Performance.

Irish Drama and the Other Revolutions reveals the untold story of Irish drama’s engagement with modernity’s sexual and social revolutions. The first modern Irish playwrights emerged in London in the 1890s, at the intersection of a rising international socialist movement and a new campaign for gender equality and sexual freedom. In her newest book, Professor Harris shows how Irish playwrights mediated between the sexual and the socialist revolutions, and traces their impact on left theatre in Europe and America from the 1890s to the 1960s. Drawing on original archival research, she reconstructs the engagement of Yeats, Shaw, Wilde, Synge, O’Casey, and Beckett with socialists and sexual radicals like Percy Bysshe Shelley, William Morris, Edward Carpenter, Florence Farr, Bertolt Brecht, and Lorraine Hansberry.

Susan Cannon Harris is an associate professor in the University of Notre Dame's Department of English and a faculty fellow of the Keough-Naughton Institute for Irish Studies. Her first book, Gender and Modern Irish Drama, was published in 2002 by the Indiana University Press. In it, she argues that the representations of sacrificial violence central to the work of the Abbey playwrights are intimately linked with constructions of gender and sexuality. Gender and Modern Irish Drama won two awards: the Donald Murphy Prize for Distinguished First Book at the American Conference for Irish Studies in 2003 and the Robert Rhodes Prize for Books on Literature, also at the American Conference for Irish Studies in 2003. Indeed, it was the first book in ACIS history to win both the first book and the best book prizes.

Of her newest release, Declan Kiberd, Donald and Marilyn Keough Professor of Irish Studies and Professor of English and Irish Language and Literature at the University of Notre Dame, says:
"Susan Harris has the gift of explanation without simplification. Visionary yet practical, her book restores an international dimension to Irish drama, exploring the links between blindness and insight in famous and forgotten plays. With an insistent and compelling lucidity, she restores to theatre a radical, embodied openness; and in that process raises vital questions concerning socialism and sexuality for a new generation of scholars."

Stephen Watt, Provost Professor of English at Indiana University Bloomington, writes: "Susan Cannon Harris’s Gender and Modern Irish Drama firmly established her as one of the most innovative critical voices in contemporary Irish Studies, and this book wonderfully confirms her well-deserved reputation. Its deep engagement with political, gender and queer theories − and its exceptional close readings of plays by Yeats, Shaw, O'Casey and others − makes Irish Drama and the Other Revolutions the most original and important book I have read in a very long time."