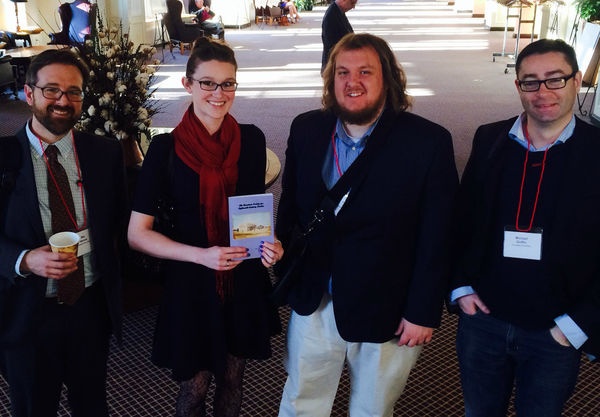 The American Society for Eighteenth-Century Studies annual conference is the major academic event for scholars working, teaching and researching in this particular rich and multifaceted period. Established in 1969, the American Society for Eighteenth-Century Studies is committed to advancing the study of a time period that has profoundly influenced our world.

Continuing a long tradition of Keough-Naughton graduate students presenting at the conference were Erin Kraus (Irish Exiles in the Age of Atlantic Revolutions: Immigrant Responses to Post-Revolutionary America) and Sam Fisher (Redefining Britishness: Poets, Prophets, and Pontiac). Both these doctoral students presented on their current research and impressed those in attendance not with only their poise at the podium and their in-depth knowledge of their respective topics, but with their detailed responses in the lengthy question and answer session that followed. Also in attendance was former Keough NEH fellow Michael Griffin, now head of the School of English at the University of Limerick.

The two Keough-Naughton sponsored panels at the conference highlighted the distinct interdisciplinary research into the eighteenth century currently being undertaken by Keough-Naughton fellows and their doctoral students. These panels featured presentations on linguistic anthropology, transatlantic history, Scottish, Irish, French connections and politics, the Midnight Court and exiled Irish revolutionaries and their social networks in the United States.

The conference venue provided Keough-Naughton fellows an excellent opportunity to visit nearby museums and exhibits in colonial Jamestown and Yorktown. The 2015 conference will convene in Los Angeles.