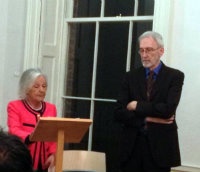 Questions of unemployment, emigration, economic contraction and the collapse of property prices are the order of the day in the Republic of Ireland today. The government bail-out of the banks has saddled Irish citizens with unimaginable debt burdens.   Stringent government austerity policies urged at the behest of the International Monetary Fund, the European Central Bank and the European Commission, which together bailed out the government, bite deeply in a traumatized society.

The financial crisis and its impact in Ireland was the subject of a conference held in Dublin from October 22 to 24 and organized by Prof. Christopher Fox, Professor Declan Kiberd and Prof. Diarmuid Ó Giolláin of the Keough-Naughton Institute for Irish Studies. Taking place in Dublin’s Keough-Naughton Center and in the august premises of the Royal Irish Academy, the conference presented a distinguished group of scholars, both from Ireland and from outside, to discuss the subject of “Sovereignty, Debt and Equity in a Time of Crisis”. This issue is the most important facing Ireland today and the conference drew not just on the expertise of economists, but on a distinguished group of scholars in the humanities and law and of journalists who have been to the fore in Irish debate on the crisis.

Saskia Sassen, Robert S. Lynd Professor of Sociology at Columbia University and Notre Dame graduate, spoke of “Brutality and Complexity in the Global Economy” while the eminent literary and cultural critic Beatriz Sarlo, former Professor of Comparative Literature in the University of Buenos Aires, looked at her own country’s experience of financial and social collapse in a lucid presentation, “Is this my city, is this my country?”, which opened the conference.

The distinguished historian Donald Sassoon, Emeritus Professor of Comparative European History in Queen Mary, University of London, spoke on the development of a state system and the paradox of ‘the waning of sovereignty’ accompanied by a proliferation of nation-states.  The notion of sovereignty in medieval and early modern Ireland was discussed by Edel Bhreathnach, CEO of the archaeological institute known as the Discovery Programme. Bhreatnach looked at ancient models of sovereignty in gaelic culture, as well as ideas of "help" or "hindrance" coming from overseas pretenders. The literary scholar PJ Mathews of University College Dublin looked at the notion of Irish sovereignty held by the activists of the late 19th and early 20th century cultural revival that led to the founding of the Irish state. The question of the Irish language was central to the cultural revival and the fate of the Irish language in the independent Irish state was the subject of the paper of Cormac Ó Gráda, Emeritus Professor of Economics in University College Dublin. His lecture focused on the decline of Irish even as it was being "ratified" by the state. 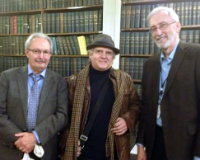 Legal dimensions of the crisis were discussed by Ronan McCrea of the University of London in a presentation entitled “National Democracy and the Courts in a post-crisis Europe.”  Ronan McCrea showed how in most western democracies the duties of politicians to legislate and imagine a society are being palmed off onto a juristocracy, which may be sound (as the Irish Supreme Court has been) on matters of personal freedom, but not good on the hidden injuries of class, or in the long run on enhancing democratic procedure.  Economist Frances Ruane, Director of the Economic and Social Research Institute in Dublin, posed the question: “Recovering from an economic crisis: this time is it different?”

The conference concluded with a panel presentation, “Analyzing the crisis – five years on”, chaired by Professor Judith Fox of the Notre Dame Law School, in which three prominent media figures, Fintan O’Toole, Damien Kiberd and David McWilliams, gave their perspectives on the issue. Damien Kiberd put figures on the trends of the last ten years in both global and Irish terms, arguing that we may need to become the drivers of a new alliance of peripheral European states;  David McWilliams made the case for a new North Atlantic alliance with not only UK and US but also the Nordic Europeans; and Fintan O'Toole who showed how the Irish went from poster-boys for capital to poster-boys for austerity, in a classic version of the "laboratory" model.