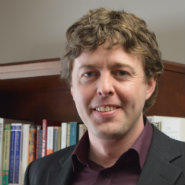 Lanigan’s lecture, sponsored by the Keough-Naughton Institute for Irish Studies, focused on Moore’s critique of Irish society in his novels.

Lanigan said Moore, in his naturalistic treatment of Dublin, developed an Irish mode of modernism.

“Moore’s deployment of the idea of suburbanization at the end of [his novel] A Drama in Muslin . . . attempts to diagnose the problems facing society and facing the city,” Lanigan said. “He seems imaginatively incapable of imposing a solution within the space of Dublin.

“There’s this sort of discontinuity between Dublin as a contained space and he ends up having to project a set of solutions elsewhere.”

Lanigan said Moore’s dilemma was common among Irish writers of his time, as were themes of Irish nationalism and social decline. In his novel “Confessions of a Young Man,” Moore exposes the Francophile within himself and explores his own hostile feelings toward Ireland, Lanigan said.

“It is indicative of his tendency to measure Ireland against France and Dublin against Paris, always to Ireland’s detriment,” Lanigan said. “Paris is a space in which you can get rid of all the inherited traits of language and nationality in contrast with Dublin.”

Moore was interested in the aestheticism of Parisian culture, Lanigan said. He saw Paris as a place where naturalism and impressionism could flourish, whereas Dublin remained stagnant in the arts.

According to Lanigan, Moore’s aim was to improve Irish society through modernization. He invoked the peasantry in his work to call attention to the social and economic disparities within Dublin.

“He shows the picture of a society incapable of change,” Lanigan said. “A static vision in which an alternative does not appear possible, and yet in which the end of the current system is inevitable.”

Moore’s writings revealed a society marked by fundamental injustice, Lanigan said, and showed how social stagnation was occurring not only in the heart of the slums but in the more affluent suburbs as well.

Lanigan said Moore provided “a street-level view of poor urban experience” by highlighting the proximity of poverty and wealth in Dublin, while also applying to the city a sense of meaning and modernity.