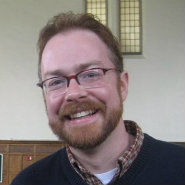 Lindsay Haney, a sixth year graduate student in Notre Dame's English Ph.D. program is exploring the question of "what does it mean to be an 'Irish' man in the recent times of economic and social upheaval."

Under the direction of Keough-Naughton Fellow and English professor Susan Cannon Harris, Lindsay follows the trajectory of the Celtic tiger and its impact on Irish society, as evidenced through the authors’ work and societal responses.  In the fall of 2011, the Keough-Naughton Institute funded six weeks of research in Dublin where Lindsay attended over 30 plays, met with writers and producers and conducted archival research.  The time allowed him to look at thematic trends beyond the economic crash.

“I came to Notre Dame because of its strong Irish Studies program, its resources and reputation for support and especially to work with Susan Harris,” says Lindsay.  Professor Harris' expertise in gender identity and modern Irish drama also drew Lindsay to Notre Dame's English Ph.D. program. First completing a B.A. in English at the University of Washington, followed by an M.A in English with an Irish Studies concentration at Boston College, Lindsay credits the community of scholars for his success at Notre Dame.

Lindsay says, “Notre Dame fosters a sense of community among its graduate students, but also the broader Irish Studies community.  Through the Irish Seminar and the Institute’s speaker series I have the opportunity to meet and connect with scholars from around the world.”