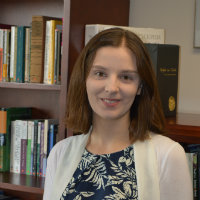 Rachel Banke, a second year graduate student in the Department of History, was introduced to the Keough-Naughton Institute years ago, when as a high school senior she observed an Irish language class on campus.  At the end of class, the Irish foreign language teaching assistant walked her to the Institute and introduced her to the people and mission of the Irish Studies program.  After graduating with a minor in Irish Studies from Boston College, Rachel returned to Notre Dame to pursue her graduate work. From the expertise of her advisors to the multitude of stellar opportunities, Rachel commends the quality of Irish Studies at Notre Dame.

Currently, Rachel focuses her work on 18th century British Empire.  Her interests have deepened from considering what it means to be an Irish American to an interest in state formation in the Atlantic region British colonies.  Working with Professors Jim Smyth, Rory Rapple and Patrick Griffin, all historians in Atlantic region history, Rachel plans to examine the impact of the Seven Year’s war upon colonies along the Atlantic coast.   She hopes to spend time this summer exploring colonial office papers in London before initiating her dissertation. 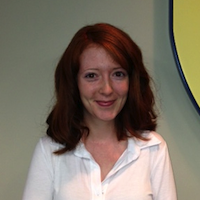 Jill Wharton received her M.A. in English from the University of Vermont, where her association with Professor Helen Scott kindled her interest in Irish Studies.  During her time at UVM, Jill “began to appreciate the kind of political and aesthetic interventions we can understand Irish literary forms to be making in the 20th century, which led me to my first writings on Yeats, Joyce, and Heaney, and, eventually, to apply to Notre Dame.” Originally introduced to Irish poetry by reading Declan Kiberd’s works in college, her attention was cemented when she came to Notre Dame and attended one of Declan’s lectures for if “you meet Declan, you want to do Irish Studies!”

Now a second year doctoral candidate in English working with Declan, and advised by Professor Barry McCrea, Jill is grateful for the opportunities provided by the Institute, including travel and research abroad.  To date, she has spent two summers in Galway in language immersion, attended the 2013 IRISH Seminar in Paris and participated in ongoing workshops through the International Network of Comparative Humanities. Jill intends to participate in an international Joyce Symposium in Utrecht this June.