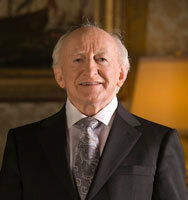 President of Ireland Michael D. Higgins is the guest of honor at a luncheon hosted by the University of Notre Dame and the Keough-Naughton Institute for Irish Studies on Tuesday, May 13, 2014, at the Chicago Club, Chicago, Illinois.

President Higgins will speak to the University’s Ireland Council, Notre Dame International and Keough-Naughton Institute for Irish Studies Fellows about the many connections between Ireland and Notre Dame.

Says Christopher Fox, director of the Keough-Naughton Institute for Irish Studies, “We are delighted to host President Higgins, along with his wife Sabina, and Anne Anderson, Ireland’s Ambassador to the United States. It is a perfect ending to our yearlong celebration of our 20th anniversary, as we continue our work strengthening the intellectual and cultural associations between Notre Dame and Ireland.”

The ninth President of Ireland, Higgins is known for his contributions to academic as well as political life. A former professor of political science and sociology, Higgins is a writer and poet. His works examine Irish politics, sociology, history and culture. Published pieces include two collections of essays, Causes for Concern—Irish Politics, Culture and Society and Renewing the Republic. He has also published four collections of poetry—The Betrayal; The Season of Fire; An Arid Season and New and Selected Poems.

Higgins has been a public servant at nearly every level and notably served as Ireland’s first Minister for Arts, Culture and the Gaeltacht, where he promoted the Irish language, including the creation of an Irish language channel, and revitalized the Irish film industry.

As President, Higgins has reached out to the Irish diaspora and bolstered ties with the Irish abroad.  His dedicated efforts to promote human rights and democracy in Ireland and abroad were recognized as the first recipient of the Seán MacBride Peace Prize from the International Peace Bureau in Helsinki.

The luncheon provides the opportunity to highlight the close ties between Notre Dame and Ireland facilitated by the Keough-Naughton Institute, notably Dublin’s Global Gateway centered in O’Connell House; the summer internship program which places Notre Dame students in Irish government, arts facilities, non-profits and businesses; faculty and student exchange arrangements with Irish universities and the forthcoming 1916 documentary produced by Notre Dame and the Institute to be jointly aired on PBS and Ireland’s public television station RTÉ.

President Higgins is visiting the Midwest to give the commencement address and receive an honorary doctorate at Indiana University, Bloomington.