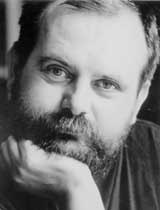 Hesburgh Libraries recently acquired the papers of Patrick McCabe, renowned Irish novelist and playwright.  Twice listed for the Booker Prize, his novel The Butcher Boy “is a canonical Irish novel,”  according to Aedin Ni Bhroithe Clements, Irish studies librarian at Hesburgh Libraries who notes, “McCabe has been at the forefront of Irish literature for at least three decades.”  Born in Clones, County Monahan in 1955, McCabe is a writer of novels, short stories, plays and screenplays. A former visiting fellow in the Keough-Naughton Institute, he also has participated in the Irish Seminar, an annual intensive graduate course run by the Institute.

McCabe describes his papers as the “handwritten geneses of everything I have written over a period of 35 years and all the associated correspondence.” A large archive, the collection consists of over 50 boxes of letters, notes, drafts and manuscripts extending over his whole career and includes correspondence relating to the films based on McCabe’s fiction.  His works of fiction, drama and cinema are included.

Barry McCrea, Keough Family Professor of Irish Studies and Professor of English and Romance Languages, received a Library Acquisition Grant from the Office of Research to partially fund the acquisition of the Patrick McCabe Literary Papers. Hesburgh Libraries contributed the remaining funds.

The acquisition also received backing from Declan Kiberd, Donald and Marilyn Keough Professor of Irish Studies, who felt the archives represent a significant investment in Notre Dame’s status as one of the premier places in the world to study Irish literature.

“The university, as you know, already has a deep and constantly developing relationship with this writer. As a consequence, many of our postgraduate and undergraduate students have written important essays on his work--and quite a few have worked personally with him. If we have his papers, these would provide a basis for even more ambitious projects. His work is valuable not only for the light it casts on social change in modern Ireland but also for its connections to cinema, radio and (most recently) television material---so it will be of interest not just to literature students but also in the area of media studies.”

After being catalogued, a process expected to last a year, the papers will be available in the Department of Special Collections for students and visiting scholars to consult.