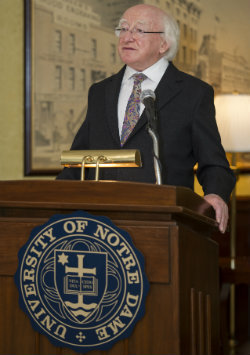 Michael D. Higgins, President of Ireland, spoke warmly of the connections between the University of Notre Dame and Ireland at a luncheon hosted by the Keough-Naughton Institute for Irish Studies in Chicago on May 13, 2014.

The President was joined by his wife, Sabina Higgins and the Irish Ambassador to the United States, Anne Anderson.

Commencing with four Irishmen accompanying Fr. Sorin to Indiana, the President spoke of the University’s continuing involvement with Ireland, including its current role in the preservation of Ireland’s language and literature, its music and its history.

The President noted the Keough-Naughton Institute’s 20 year effort to introduce students to Irish culture and to Ireland itself, as it encouraged and enabled students to travel to Ireland to experience firsthand what they have studied, “having them as a part of the global Irish family is a gift for which I would like to thank all those involved in the Keough-Naughton Institute.”

He emphasized the history of Ireland was a history of migrants and respected the contributions made by those migrants in keeping alive Irish culture. He cited the famed Chicago musician and collector Chief O’Neill, whose collection is housed in Hesburgh Libraries, as an example of this circularity of American influence on Ireland.  The President commended the contributions, efforts and energy of the two men who gave the Institute its name; one a successful Irish–American who wished to renew scholarship on Ireland and the other a prominent Irish businessman.

The President made special mention of the Institute’s 1916 documentary, which is partially funded by a tax incentive program he initiated while Minister for Arts, Culture and the Gaeltacht, as another avenue to explore the interconnections between Notre Dame, Ireland and the Irish everywhere.

“Institutions such as Notre Dame’s Keough-Naughton Institute for Irish Studies are a vital link in the chain that joins our two countries.”