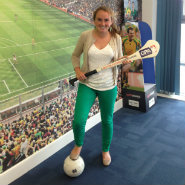 Ten rising seniors spent their summer interning in Ireland through the Keough-Naughton Institute for Irish Studies internship program.  The internship program has been a student favorite since 1997, when a student now known as Fr. Sean McGraw, C.S.C., was the first Summer Intern, where he worked for the leader of Fine Gael, an Irish political party.

The students are placed in an internship that enhances their studies and interests. Sam Caesar found her internship perfectly suited to her major. “As a Political Science and Peace Studies Major, an internship with the Anglo-Irish Division at the Department of Foreign Affairs could not have been a better match for me. There, I worked primarily with Reconciliation Funds, a section of the Division that deals with the ongoing peace process between Ireland and Northern Ireland.” She engaged with the myriad of groups and organizations that seek to promote peace, understanding, respect, and good relations between and amongst individuals and communities throughout Northern Ireland and the border region.

Similarly, Adam LaPlaca’s placement was chosen due to his interest in law enforcement and criminal justice.  Adam spent seven weeks with The Centre for Cybersecurity and Cybercrime Investigation at UCD. The organization is the leading European center for training in this field and is the host organization for many different projects funded by EUROPOL (European Police Force).  Adam says, “During my time at UCD CCI, I was given the opportunity to take part in two courses that are specifically designed for law enforcement officials.  One course was in the programming language, Python, and the other course was in Database Management.  Earning certification in these two courses gave me some extremely valuable knowledge in this field and has provided me with some strong qualifications for my future job search.”

The internship places Notre Dame students in partner organizations based on their intellectual passions, individual expertise and career ambitions live and work in Dublin, Ireland. The internships last for seven weeks each summer. All students are under the guidance of an internship coordinator in the Dublin based Keough Naughton Notre Dame Centre. Beyond the invaluable work opportunities, students are exposed to Irish culture through a variety of experiences. The internships are funded through the generosity of members of the Ireland Council, and all Notre Dame juniors are invited to apply for this opportunity.

This summer Kaitlyn Demchuk interned for seven weeks in the Press Office for the Department of Foreign Affairs. “My time in the Press Office allowed me to truly gain insight into the world of foreign affairs. From discovering how the Press Office released information through different sources, to learning how the visits of foreign leaders are planned and conducted, I observed how the Department of Foreign Affairs conducts itself as an international agency.”  Kaitlyn also learned how to evaluate the news, both internally and internationally, with a view to what was relevant to Ireland’s reputation internationally.

In addition to Sam, Adam and Kaitlyn, Regina Gilmore interned with Localise, a non-governmental agency; Even Graham spent his summer with the Educational Department of the National Gallery of Ireland; Annie McCarthy was with another non-governmental agency, Festina Lente; Will Peterson interned with Ireland’s national theater, the Abbey Theatre; Alyssa Mall worked with Poetry Ireland, Mary Frailey interned with the Gaelic Players Association and Melissa-Rae Moors was the first to intern with the National Folklore Commission.