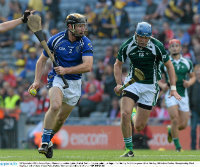 The Gaelic Athletic Association and the Gaelic Players Association, with the support of Aer Lingus, are staging the Super Hurling 11s – ‘The Celtic Champions Classic’ at the University of Notre Dame on Saturday October 19 to coincide with the biggest College Football showdown of the season when Notre Dame take on arch rivals USC.

The unique short-form of hurling has been devised and trialled over the past six months by Ireland’s leading Gaelic athletes with a view to having a version of the game suitable to play at established sporting venues in the USA. The traditional form of hurling, a 15-a-side game, is played on much larger fields. However, by creating this new form of the game we are now ready to present this exciting format in Notre Dame’s Lacrosse Stadium during the tailgate build-up with up to 100,000 football fans on campus.

The game forms a unique part of Notre Dame’s game-day itinerary and will provide an opportunity to showcase our greatest hurlers to a new and influential audience.

We have just seen the most dramatic conclusion to the Hurling Championship season in Ireland with over 160,000 spectators attending the two hurling finals after the first decider finished in a tie.

As well as exhibiting the breathtaking skills of hurling, the visiting Irish athletes – many of Ireland’s leading All-Star hurlers – will also reach out to a number of community projects in local schools through Notre Dame’s Play Like a Champion Program. They will also be sharing their skills with the University’s Lacrosse team as well as celebrating both sports’ ancient roots.

Speaking about the visit, the President of the GAA, Liam O’Neill, said: “We are delighted to announce details of this joint initiative with the GPA, one that presents us with an unrivalled opportunity to showcase the special game that we all know hurling is to a new audience. I look forward to seeing how the game is received and also how our players adapt to it.”

GPA chairman and former Irish hurling star Dónal Óg Cusack added: “This Classic exhibition is a truly wonderful opportunity for us to exhibit hurling at a high profile US sporting event. We believe that our games rank alongside the best sports in the world and the staging of this game in Notre Dame is part of our commitment to convey that message to a new and influential audience.”

Declan Kearney, Aer Lingus Director of Communications said: “This is an excellent opportunity for hurling to further boost its rapidly growing international appeal. We’re delighted to lend our support to the GAA and GPA in the initiative and are looking forward to welcoming Ireland’s greatest hurlers onboard in October.”

The Gaelic Players Association and Gaelic Athletic Association are staging the Super Hurling 11’s — ‘The Celtic Champions Classic’ at 3pm in the Arlotta Lacrosse Stadium where Fighting Irish fans on campus will get a chance to witness Ireland’s leading Gaelic sports stars perform the ancient Irish game of hurling, the fastest field sport in the world. This event will showcase a unique short-form of the game for the first time and will feature Ireland’s very best athletes. Check out Irish hurling in this video.