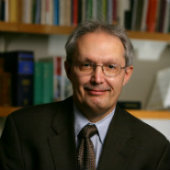 From 2001 through 2017, Professor Fox was the director of the Keough-Naughton Institute for Irish Studies, which he co-founded with Seamus Deane. Earlier, he established The Irish Seminar, which convenes every summer (to date, in various years, in  Dublin, Paris, and Buenos Aires) to bring together Irish scholars, graduate students, and faculty in Irish Studies.  An intense intellectual exchange and experience, the seminar has been a formative experience for scores of Notre Dame graduate students and their peers from universities around the world.

One of Professor Fox's many roles as director of the Keough-Naughton Institute was serving as executive producer of the landmark documentary 1916 The Irish Rebellion.

In paying tribute to Professor Fox at the closing lecture of the Fall 2017 semester, Professor Declan Kiberd, the Donald and Marilyn Keough Professor of Irish Studies, Professor of English and Irish Language and Literature, said: