Elizabeth "Lily" Williams grew up in a progressive Presbyterian household, which nurtured her artistic talents from an early stage. Having trained under May Manning (at the famed Dublin Metropolitan School for Art) and then, at The Royal Hibernian Schools, under Walter Osborne, her loose impressionist style was allowed to develop alongside that of her immediate contemporaries, Beatrice and Dorothy Elvery, Grace Gifford, and Estella Solomons, the latter two of whom would have heightened her awareness of the Gaelic revival and its accompanying Nationalism.

Williams' family home at 104, Marlborough Road hosted ''literary afternoons'' which were attended by the likes of lifelong friend Arthur Griffith. In Protestant Nationalist circles, Griffith was popular for his provocative non-violent policies.

Williams is best known for her subtle pastel portraits of leading Nationalists of the day, including Griffith, Padraig Colum, and The O'Rahilly. At Griffith's request she also designed "stamps" for Sinn Fein in 1907. They were to be placed alongside official stamps and had the dual purpose of raising both funds and the profile of Sinn Fein. One of the two "stamp" images designed by Williams was of the romantic Cathleen Ni Houlihan, a personification of Ireland also used by Sir John Lavery and ultimately found on the old Series B pound notes.

It is this Nationalist ethos which permeates "Hibernia." The beautiful figure, seated and alert, writes with a quill on to parchment draped in the tri-color. She personifies the national awakening and is as anonymous as she is all embracing, an icon for her times. (Comparisons can be made between ''Hibernia'' and a work by fellow art student Beatrice Elvery (aka, Lady Glenavy) entitled "Eire" executed by Glenavy in 1907.

"It is one of the challenges of art history that, though imagery survives, context often dwindles. Such is the case here. Today, our widespread familiarity and acceptance of the Irish Tri-Color flag may give one the impression that this image is merely interesting, romantic, perhaps sweet; nothing of its controversial flavor is available to our consciousness today. But when this was drawn, it was highly controversial in general and within Williams' own family. The Tri-Color was illegal to be flown or shown in 1916, and to drape the age-old national symbol of Hibernia in it—especially at that moment-—well, that was quite courageous. Also, unlike previous iterations of Hibernia (typically seen astride the common symbols of the Irish wolfhound, the harp, etc.) here, Hibernia is overtly draped in the business of the Rising and in its hoped-for result, independent statehood, as she pens the Constitution. And, lest there be any remaining uncertainty as to the artist’s feelings, Hibernia is wearing the classical crown of victory about her head: laurel leaves. Though it was first gifted to a delegation of patriotic Irishmen who went to France in 1848 to learn how the French rid themselves of aristocratic rule, the Tri-color remained largely “under wraps” until 1916 as it was illegal to display it."

[For further information on Lily Williams, please refer to the feature on her ''Comrades and Friends'' by Hilary Payle, Irish Art Review, Summer 2013 (see this LINK)]

Below, a very early Tri-Color belonging to Willie Halpin.

To further illustrate the events of 1916, the year Lily Williams created "Hibernia," Mr. Fahey offers a second image: The clock from the General Post Office (GPO), the site of major events in the 1916 Rising.

This is an astonishing survivor/relic of a momentous event and time. If this clock could talk, what would
it tell us about the events it witnessed first-hand? 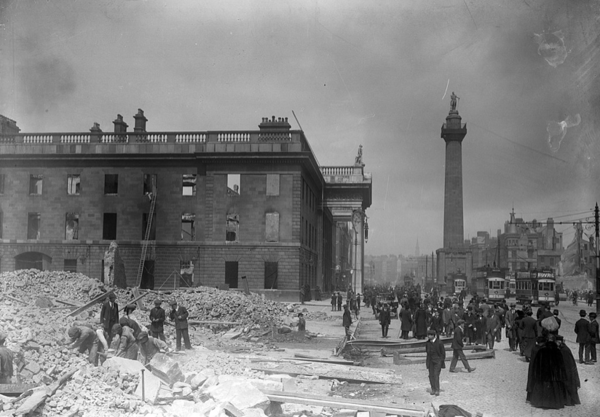