“Mainie” (Mary Harriet) Jellett was born and raised in Dublin (Fitzwilliam Square) and, like Lily Williams (see “Hibernia, 1916” entry), received early art tutelage from May Manning and Elizabeth Yeats (sister of WB, Jack and Susan). Along with her contemporaries, Mary Swanzy and Evie Hone, Jellett is credited for introducing Modernism and Abstraction into Ireland in the early 1920s. She traveled to France with Hone for extended periods to learn from and to work on the theoretical underpinnings of Cubism with the artists Andre Lhote and Albert Gleizes. She also spent time in art studies with Walter Sickert and William Orpen—all great teachers! As such, her artistic career can be identified by experiments/periods spent in various stylistic approaches to her art.

Her longest-running pursuit was in the area of Cubism and Abstraction, as she saw its honesty of interpretation as an antidote to the Academic Realism which had dominated the artistic landscape for so long. She also saw that this approach most mirrored the great Irish art of the 7-9th centuries. She wrote and spoke widely on these topics.

Along with several other influential artists, she was one of the founders of the IELA, (The Irish Exhibition of Living Artists) founded in 1943 for the purpose of giving a platform to and respect for Irish Modernists, whose work was either being ignored or rejected by more conservative art societies at the time. Sadly, she died before their first exhibit in 1944. In addition to painting and drawing, writing about and teaching art, Jellett also produced some wonderful designs for rugs. [For more on Jellett's rugs, please follow this link.]

Commentary on the painting:

Typically, landscape paintings attempt to render an artists’ interpretation of a specific place as she/he experienced it, i.e., its topography, its  ingredients, aspect, mood, colors, etc.

Rather than trying to capture a specific view, Jellett was trying here to capture the  “essence” of that which “typifies” the Irish landscape. (Much as the previous entry of hers in Irish Art  . . . Amplified,  “Flower Forms,” was an attempt to depict “flower-ness” as such: color, curvilinearity, geometry and interconnectivity, etc.)

Here is what Seán Kissane, Curator at the IMMA (Irish Museum of Modern Art, Dublin) had to say about “The Land-Éire”

At first glance Éire is a typical late-Jellett abstract composition but a closer look reveals the clever use of illusionistic space within the painting. Jellett delivers the Cubist aim of a flattened-out picture plane, particularly at the center of the picture.  Into this she masterfully inserts passages of three-dimensional space, such as those that describe the cottage at the center-right and mountain peaks at the top.  This has the effect of creating optical shifts where the eye moves in and out of the abstract and figurative planes.  This optical shifting also functions to create visual puns where the audience can play the game of identifying some of the symbols that might describe Ireland: the cottages of the west, the mountains of the south, the waves of the Atlantic, the rain-laden clouds, the green fields or the Irish Harp.

By the time Jellett painted this picture she was the acknowledged doyenne of Irish modernism. Following her studies under masters in Paris in the early 1920s, she returned to Ireland and exhibited works of pure abstraction that attracted almost universal derision.  This merely served to strengthen her resolve and she proselytized for modern art: teaching students from her studio, giving lectures, engaging in public debates; all the while developing her personal style alongside the artists Evie Hone and Albert Gleizes.  All three were deeply devout people, and from the mid-20s she began to integrate religious images into otherwise purely abstract compositions.  Her stylized crucifixions, depositions and other scenes used the art that was most recognizable and available to the ordinary people of Ireland (e.g. in churches) and married it to contemporary developments in Modernism.  This had the effect of making abstract art more intelligible to an Irish audience.

Her desire to communicate to a wide audience meant that within a decade her work was embraced by the Irish establishment.  Although the government under De Valera is most commonly associated with the realism of Seán Keating, they also recognized the value of appearing ‘Modern’ and outward-looking on a world stage and in 1939 chose Jellett and Hone, among others, to represent Ireland at the New York World’s Fair.  This political alignment is relevant to a reading of this picture because alongside its playfulness it has a serious tone. The Land-Éire is a telling title for Jellett to use for it is not the merely descriptive ‘Ireland’ nor the poetic ‘Hibernia’ but after 1937 it denoted the political name of the new state. In 1940 when this work was painted, that nation was in a state of emergency and the outcome of the war far from certain. The Land-Éire is a picture of a land under siege surrounded by stormy seas and foreign foes. This gives poignancy to the devices used by the artist for the very existence of the way of life that they symbolized was under threat.
Seán Kissane, Curator of Exhibitions, IMMA

Poetic and musical reflections on The Land – Éire (1940)

(Representing input from three different centuries, all gathered around the same topic!)

I asked Dave Munnelly [see his biography here] to ponder over this painting and to suggest a piece of music that he felt “suited” it. I love his choice: “The Visitor,” composed and played by him here.

As you listen to Dave's composition, it may help to remember that Mainie Jellett spent much time as a “Visitor” in Paris—and was so influenced by that time. It feels appropriate to imagine that she might be listening to accordion music while painting in her studio, before taking a break to walk through the streets of the city. This composition and soundtrack has a lovely dual Irish-French flavor to it and its “twists and turns” are wonderfully evocative of the painting’s composition.

And though Thomas Davis (“My Land”) called for the creation of a uniquely “Irish” school of art, Davis himself would agree that Ireland’s association(s) with France were crucial in the development and maturity of Ireland’s own sense of nationalism.

Artistically, the number of Irish artists who honed their skills in Paris and/or in several of the artistic havens in France was astonishing—their subsequent return to Ireland with those newly honed skills and enhanced outlooks did much to help Irish art develop its own “voice.” 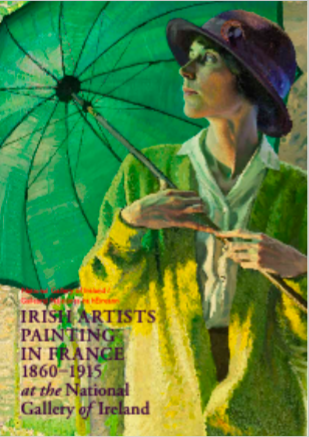 If you would like to read more about the Irish-French connection in art, you might enjoy this publication from the National Gallery of Ireland which speaks directly to/about this subject matter.

Though the time period of this publication stops at 1915, this “connectivity” continued on long after 1915 and still exists today.