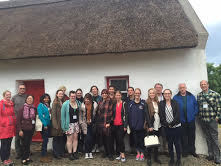 Since 1999, the Keough-Naughton Institute for Irish Studies has sponsored a summer graduate seminar, the IRISH Seminar, that brings together Irish scholars, graduate students, and faculty in Irish Studies.  An intense intellectual exchange and experience, the seminar has been a formative experience for scores of Notre Dame graduate students and their peers from universities around the world.

This summer, with Keough-Naughton Faculty Fellow Isabelle Torrance (now, Associate Professor, Aarhus Institute of Advanced Studies, Aarhus University, Denmark) as director, the theme of the seminar was “Classical Influences.” It was convened this past June first at O'Connell House, the Keough Naughton Notre Dame Centre in Dublin, and then at Notre Dame’s new center in Connemara, Kylemore Abbey.

“The idea behind the design of this year’s IRISH Seminar,” explains Professor Torrance, “was to examine Irish culture from a number of different historical, sociological, and literary perspectives under the umbrella of the theme ‘Classical Influences’—all with the aim of recognizing the wide-ranging impact of Greek and Roman models on the development of Irish society. 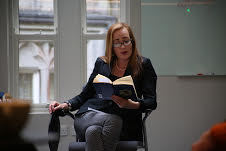 “Literary greats, such as Yeats, Joyce, and Heaney, whose work is well known to have been influenced by classical literature, were addressed, as well as the work of prominent contemporary poets and playwrights such as Eavan Boland, Marina Carr [who presented to the students on The Oresteia and her play, Ariel], Michael Longley, Derek Mahon and Frank McGuinness.  Students discussed what Irish authors do with classical material, how their approaches differ from each other, and what is particularly Irish about their adaptations.

In the second week of the Seminar, students joined the conference “Classics and Irish Politics 1916-2016,” also directed by Professor Torrance, and co-hosted in Dublin by the Royal Irish Academy and Trinity College Dublin.  That conference addressed, how models from Greek and Roman antiquity have permeated Irish political discourse over the last century. [See the complete schedule for the "Classics and Irish Politics 1916-2016" conference and Professor Torrance’s conference report]

In addition to lectures and readings, students attended exhibitions, visited Kilmainham Gaol, and took part in excursions to Patrick Pearse’s cottage and the Aran Islands.

The complete schedule for the 2016 IRISH Seminar demonstrates the academic and cultural breadth and depth of the three-week academic event.  See: IrishSeminar2016.FinalSchedule (138k)

One student, Jessica Kim, a graduate student in English at the University of Notre Dame, offered her reflection on “Classical Influences. ”

“Attending the IRISH Seminar in Dublin and at Kylemore Abbey was a beautiful intellectual and cultural experience.

This year’s seminar theme, “Classical Influences,” allowed me as a literary scholar to access an exciting development in Irish Studies regarding the longstanding ties between classical culture and Irish letters, politics, and history – most pertinently, for me, during the revolutionary era surrounding Easter 1916, as well as in contemporary Irish drama and poetry. The theme thus highlighted a layer of thought surrounding a “traditional” continuity in the Irish imaginary to which I would not have had exposure in other currents in my scholarship.

“A great advantage of the seminar was the contact it afforded me with a great diversity of scholars from fields adjacent to, but not necessarily directly connected to, my interests in canon formation in modernist fiction, such as in classical reception studies, contemporary Irish drama, Irish revolutionary history, medieval Irish writing, or even the Catholic monastic tradition in Ireland.  Yet, these scholars and their presentations all united around the theme of classical influences in Irish culture in one form of inquiry or another.

“The gathering of such a luminous company of scholars with such diverse interests and insights into this deep vein of the classical tradition in the Irish exercise of self-fashioning across the ages was galvanizing, to say the least. From our rich seminar discussions at the O’Connell House in the heart of Dublin, to our explorations of the countryside surrounding Kylemore Abbey in the west of Ireland, which both encased and challenged our understanding of the “classical” from an Irish perspective, the Seminar provided me with a dense core of intellectual and cultural experiences from which I will draw, both personally and in my scholarship, for many years to come.” 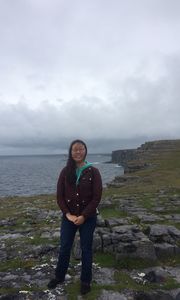