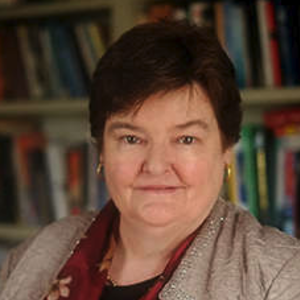 Professor Nic Dhiarmada is originator, writer, producer, and executive producer of the award-winning, multi part documentary series on the Easter Rising, 1916 The Irish Rebellion, and its 86-minute feature version, both narrated by Liam Neeson, that were broadcast and screened internationally throughout 2016 and 2017. She is also author of the companion book The 1916 Irish Rebellion, published by the University of Notre Dame Press.

Also a Concurrent Professor of Film, Television, and Theatre, Professor Nic Dhiarmada has authored over 35 screenplays and 10 documentaries. She is the author of Téacs Baineann, Téacs Mná: Filíocht Nuala Ní Dhomhnaill as well as numerous articles on Irish language literature and culture. Additionally, she is an editor of The Field Day Anthology and co-editor with Máire Ní Annracháin of Téacs agus Comhthéacs: Gnéithe de Chritic na Gaeilge.

Professor Nic Dhiarmada taught courses on film and literature, with some emphasis on Ireland's west coast. In Fall 2019, she led a community course at the DeBartolo Performing Arts Center on "Screening the Irish Troubles."