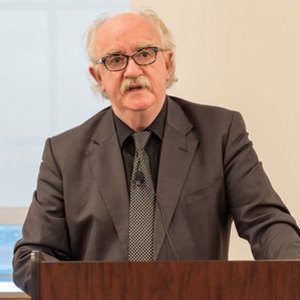 Declan Kiberd is the Donald and Marilyn Keough Professor of Irish Studies and Professor of English and Irish Language and Literature Emeritus.

Professor Kiberd’s specialty is Modern Irish and English Literature.  A leading international authority on the literature of Ireland, both in English and Irish, he has authored scores of articles and many books, including Synge and the Irish Language, Men and Feminism in Irish Literature, Irish Classics, The Irish Writer and the World, Inventing Ireland, Ulysses and Us: The Art of Everyday Life in Joyce’s Masterpiece, and (with P.J. Mathews) Handbook of the Irish Revival: An Anthology of Political and Cultural Writings 1891-1922 (Abbey Theatre Press, 2015; University of Notre Dame Press, 2016). On June 22, 2015, President of Ireland Michael Higgins delivered a lecture to celebrate the launch of the Handbook, which was accompanied by performances by Abbey Theatre actors.

His study of Irish literature, Inventing Ireland, was praised by the late Edward Said as “a highly readable, joyfully contentious book.”

Professor Kiberd’s most recent book, After Ireland: Writing the Nation from Beckett to the Present, was published by Harvard University Press in 2018. He is currently finishing a book called Beckett Unknown: Mysticism without God and a short book about cricket, England and Eternity.

Professor Kiberd has lectured in some 30 countries worldwide and contributes essays and reviews to the Irish Times, the Times Literary Supplement, the London Review of Books, and The New York Times.

At Notre Dame, Professor Kiberd has taught scores of undergraduate and graduate students on both the University's home campus and at the Dublin Global Gateway. His courses are devoted to a variety of themes and authors, including W.B. Yeats and James Joyce. For undergraduates, he also teaches a popular course on children's literature. He has been a leading scholar at the Institute's summer graduate IRISH seminar, lecturing in Dublin, Kylemore, Buenos Aires, and Oxford.

In 2018, Professor Kiberd  led the inaugural Keough Global Seminar at Babeş-Bolyai University in Cluj-Napoca, Romania, which also awarded him an honorary degree.

In 2019, he was elected to the American Academy of Arts and Sciences.

Beginning in 2019, Professor Kiberd led, along with Enrico Terrinoni (Università per Stranieri di Perugia and President of the James Joyce Italian Foundation) and Clíona Ní Ríordáin (University Sorbonne Nouvelle-Paris 3),  the Keough-Naughton Institute's Global Ulysses initiative. As we approach the centenary of publication of Joyce's novel, Global Ulysses continues with conferences and events planned for Rome, Paris, and Dublin.

In August 2020, he led the Kylemore Book Club series called "Understanding the Body with W.B. Yeats and James Joyce."