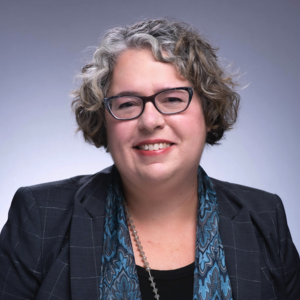 Amy Mulligan (M.Phil, D.Phil, University of Oxford) conducts research and publishes on the languages, literatures and cultures of medieval Britain, Ireland, and Scandinavia, with particular emphasis on cultural and literary exchange among the Irish, Welsh, English and Scandinavian peoples in the medieval North Atlantic. She is an associate professor in the Department of Irish Language and Literature.

Her monograph A Landscape of Words: Ireland, Britain and the Poetics of Space, 700–1250 (Manchester University Press, 2019) won the American Conference of Irish Studies' Donald Murphy Prize for a Distinguished First Book.

The research and writing for A Landscape of Words was supported by two prestigious fellowships. In 2015, Professor Mulligan won a National Endowment for the Humanities grant. With her 2016 Fulbright award, she spent a year at the University of Nottingham, which houses the Centre for the Study of the Viking Age and the Institute for Name-Studies.

Professor Mulligan has also written about poets and political literary myths, gender, sovereignty and depictions of the body politic, and the role of geography in Irish and Icelandic narratives. She is co-editor of Moving Words: Literacies, Texts and Verbal Communities of the Nordic Middle Ages (Brepols, 2019). Her publications have appeared in the journals Speculum, Journal of English and Germanic Philology, Studies in Philology, and Cambrian Medieval Celtic Studies, and in the volumes Constructing Gender in Medieval Ireland (Palgrave Macmillan, 2013) and Norman Tradition and Transcultural Heritage (Ashgate, 2013). In addition to her NEH and Fulbright awards, she has held major research fellowships at the University of Oxford, the Centre for Viking and Medieval Studies (Oslo), University of Michigan, the Institute for Research in the Humanities (Madison, Wisconsin), and the Centre for Medieval Studies (Bergen).

An additional research focus of hers is the Irish American experience in Chicago, including its roots in medieval Ireland. She is currently writing a book titled Medieval Chicago: Irishness, Whiteness, and the Allure of the Past 1871-1934.