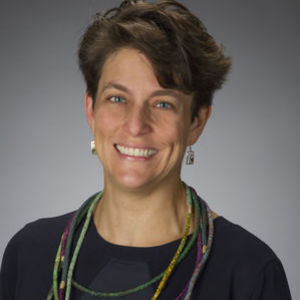 Sarah McKibben, Associate Professor and Chair, Irish Language and Literature, joined the Notre Dame faculty in 2002. She received her M.Phil. in Irish Studies at the National University of Ireland, Dublin and her doctorate from Cornell University (2003).

Professor McKibben’s research focuses on Irish poets of the 16th and 17th centuries, who composed compelling artistic expressions of praise and warning — as well as satire — in the face of an antagonistic, expanding Tudor-Stuart state.  For her second book focusing on bardic defenses of their practices in the face of attack, tentatively called Tradition Transformed: Bardic Poetry and Colonialism in Early Modern Ireland, c.1560-1660, she won a fellowship for 2019 from the National Endowment for the Humanities, as well as one in 2018 from the American Council of Learned Societies.

Previous honors include the Adele Dalsimer Dissertation Prize from the American Conference for Irish Studies in 2004.

Professor McKibben is the author of Endangered Masculinities in Irish Poetry, 1540-1780 (UCD Press, 2010), which received Honorable Mention for the 2010 Rhodes Prize from the American Conference for Irish Studies. She was moved and pleased to deliver the 2020 Ó Buachalla Memorial Lecture in honour of her esteemed late colleague Breandán Ó Buachalla.

She has published in The Irish Review, Proceedings of the Harvard Celtic Colloquium, Éire-Ireland, Irish University Review, The North American Journal of Celtic Studies, and other journals, as well as a number of edited collections, including Blackwell's Companion to Irish Literature,  Early Modern Ireland: New Sources, Methods, and Perspectives, The Midnight Court: A Critical Edition, and Modernist Afterlives in Irish Literature and Culture, and Cambridge History of Irish Women’s Poetry (co-authored with Danielle Clarke; forthcoming).

Professor McKibben’s research interests include early modern and 18th-century Irish poetry, colonial and postcolonial studies, gender studies, contemporary Irish poetry and the politics of minority languages. She is happy to work with undergraduate and graduate students on these or related topics.