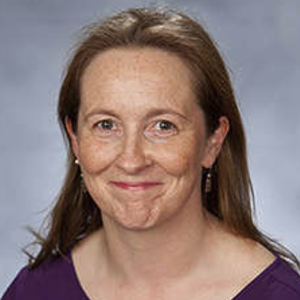 Tara MacLeod, Associate Teaching Professor of Irlsh Language and Literature, is a native Irish-speaker from Ceantar na nOileán in the Connemara Gaeltacht. She earned a Bachelor of Social Science in Social Administration and Library and Information Studies from University College Dublin (1991) and subsequently a Masters in Social Work from University College Cork (1997). She also holds a Dioplóma sa Ghaeilge from the National University of Ireland, Galway.

Professor MacLeod teaches a variety of Irish-language classes and courses on contemporary Gaeltacht culture. Her interests include second language acquisition and the development of students’ language skills in conjunction with an understanding of Gaeltacht culture. She occasionally teaches a travel class where students spend fall break in the Gaeltacht regions of Ireland focusing on the study of contemporary and material culture on the Aran Islands and in Connemara. She has received the Notre Dame Joyce Award for Excellence in Undergraduate Teaching in 2011 and 2017.

In addition to being an Irish Language Instructor at Université Sorbonne Nouvelle-Paris 3, (Spring 2016), she frequently teaches intensive language courses organized by the Center of Celtic Studies, University of Wisconsin-Milwaukee and by Daltaí na Gaeilge at Madison. She has presented papers on the use of technology in Irish language pedagogy at the American Conference for Irish Studies, at CALICO, and was a keynote speaker at the University of California, Los Angeles, Celtic Studies Colloquium.  In collaboration with Michael Campbell, she produced the three volume Glossika Mass Sentences Irish (2017-2018).  Since 2014, she has held the position of External Examiner for Modern Irish at the Five Colleges Consortium (Amherst College, Mount Holyoke College, Hampshire College, Smith College and the University of Massachusetts, Amherst).

At a national level, Professor MacLeod was elected a member of the MLA Celtic Languages & Literature Discussion Group Committee and organized the 2013 MLA panel. She acts as an External Assessor for the Government of Ireland Postgraduate Scholarship Scheme and an external reader/reviewer on manuscripts and articles related to Irish-language pedagogy for Rutledge and Taylor & Francis, among other publishers.