As the centenary year of the Easter Rising of 1916 draws to a close, the landmark documentary, 1916 The Irish Rebellion, that explains and illuminates the dramatic story of events in Dublin that week continues to win awards.

In early November, the documentary was awarded American Public Television’s Excellence in Programming Award, which followed announcements of the film as winner of the “Silver Saber Award” at this year’s International Historical And Military Film Festival in Warsaw, Poland, and, in early October, a huge “win”: the Irish Film and Television Academy’s award of "Best Documentary Series. 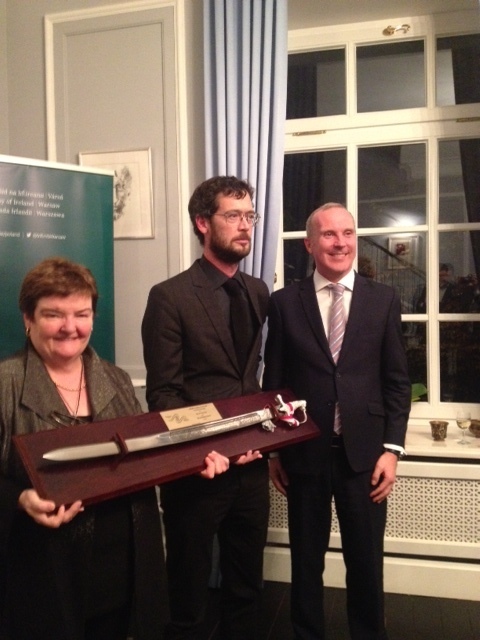 The documentary tells the story of the 1916 Easter Rising in a comprehensive way and, for the first time, places its events in their proper historical, political and cultural context as the precursor to an independent Irish state and the disintegration of colonial empires worldwide.

Keough-Naughton Faculty Fellow Bríona Nic Dhiarmada, the Thomas J. and Kathleen M. O’Donnell Professor of Irish Studies and Concurrent Professor of Film, Television, and Theatre at the University of Notre Dame, is the originator, writer, producer, and executive producer of the documentary. Christopher Fox, Professor of English and Director of the Keough-Naughton Institute, is executive producer for Notre Dame. Linda Cullen and Stuart Switzer are executive producers for COCO Television.  Ruán Magan and Pat Collins are directors. The composer for the documentary’s score is Patrick Cassidy, with music performed by the RTÉ Concert Orchestra.

More on the two most recent awards:

“With more than 4,000 titles in rights, APT’s catalog is one of the largest in public media,” explains Daniel Soles, Senior Vice President and Chief Television Content Officer of Chicago’s WTTW, the documentary’s United States presenting station. “Since 2002, a select number of programs have been honored each year for their originality, execution, creativity, the scope of content, and effectiveness in reaching audiences and engaging them on local public television stations.”

1916 The Irish Rebellion was selected this year for the honor, with the announcement made at the annual early November APT Marketplace.

The film was entered in the category of ‘’documentary fllms" at this year’s International Historical and Military Film Festival, which is in its seventh year and shows a wide range of historical and military films.

There were approximately fifty entries this year for the documentary-film section. Previous awards in this category include the Spanish film, ‘Madame Barcelona,’ Directed by Marc Petitepierre, and an Australian-Polish co-production, ‘Niegdys Moja Matka’ directed by Sophia Turkiewicz.

“I am delighted that the film has been recognised here in Poland by this award, which is a tribute to the quality of its research and cinematography. It has been a pleasure for the Embassy to arrange screenings of the film around Poland, where it has been received enthusiastically be Polish audiences, given the many parallels between the Irish and Polish struggles for independence and statehood.”

The award ceremony was held in Warsaw on Friday, October 28, at the central Luna Cinema.