Notre Dame’s Rome Global Gateway is the setting for the International Brendan Behan Conference titled “Brendan Behan: Rescuing the Writer from the Myth.”  Barry McCrea, Keough Family Professor of Irish Studies and Professor of English and Romance Languages with co-chair John McCourt of University of Rome elected to examine Behan’s work on the 50th anniversary of his death.  “Brendan Behan is one of the most talked-about but least studied of the major Irish writers of the mid twentieth century.  His work, in both English and Irish, was animated by a particular kind of revolutionary spirit.  Behan was a political, spiritual, and sexual outlaw who sought in literature a way to express his original vision.  His work is both highly idiosyncratic and representative of a particular context: literary Dublin of the post-war decades,” says McCrea.

Sponsored by the Keough-Naughton Institute for Irish Studies and the University of Rome, the conference will take place September 25-27, 2014 with events at the Rome Global Gateway, the University of Rome and features a reception at the Irish Embassy hosted by His Excellency Bobby McDonagh, Irish Ambassador to Italy.

Conference presenters include Janet Behan, Behan’s niece and author of the acclaimed Brendan at the Chelsea, and Notre Dame professors Christopher Fox, Director of the Keough-Naughton Institute for Irish Studies and Declan Kiberd, Donald and Marilyn Keough Professor of Irish Studies and Professor of English and Irish Literature and Language, who will give the plenary address.

The conference builds on work by McCrea and Theodore J. Cachey Jr., Albert J. and Helen M. Ravarino Family Director of Dante and Italian Studies, the inaugural director of the University’s Global Gateway in Rome, to build the Gateway as an important intellectual center in Europe.

The conference marks only one of McCrea’s initiatives this fall. Currently on leave, he will be based between Rome and Dublin, working on a new novel. 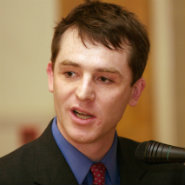 Set in contemporary Ireland, and among the Irish abroad, the novel draws on Irish mythology, especially the legend of Oisín in the Land of Youth, for its structure and themes.

McCrea became involved with INCH as it is “a very exciting way for Notre Dame graduate students and faculty working in modern literature to develop meaningful relationships with international scholars in their field.”  He hosted a workshop for INCH in the Rome Global Gateway last spring and looks to host another in the Dublin Global Gateway next semester.

In addition, McCrea is finalizing his new book, Languages of the Night: Minor Languages and the Literary Imagination in Twentieth-Century Ireland and Europe, which will be published by Yale University Press in Spring 2015.  The book “counters the long association of high modernism with the city, arguing that the mass abandonment of rural vernaculars (such as the Irish language, Italian dialects, and French patois) was a key influence in the shaping of European literary modernism.”  This new effort joins his other works published in the past year: Sherlock Holmes: Selected Stories, edited and with an Introduction by Barry McCrea (Oxford University Press) and “Style and Idiom”, a chapter in The Cambridge Companion to Irish Modernism (Cambridge University Press).