World-renowned poet Paul Muldoon’s reading at Notre Dame on January 27 proved to be yet another instance of the role of the Keough-Naughton Institute in the “worlding” of Irish Studies. 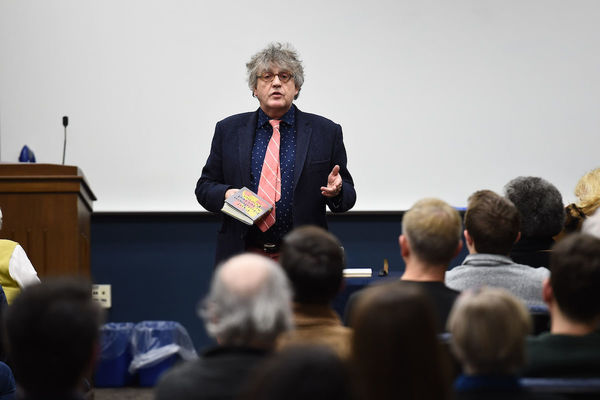 Within the standing-room only crowd at the McKenna Conference Center, one person stood out: Wit Pietrzak, Assistant Professor of English at the University of Łódź, Poland, who was visiting Notre Dame as an Institute Short-Term Fellow. Pietrzak studies and teaches contemporary Irish, English, and Polish poetry and literature, with a particular interest in the Irish poet W.B. Yeats, on whom he has written a monograph to be published by Palgrave this year. His current research topic is Muldoon and his poetry.

Christopher Fox, director of the Keough-Naughton Institute, nominated Pietrzak for the short-term fellowship after hearing him deliver a paper in October at an Irish Studies conference in Budapest on the Easter Rising of 1916 and Central Europe. (The conference occurred during the world tour of the Institute’s 1916 The Irish Rebellion.)

“Wit’s talk in Budapest was excellent. I knew he would benefit enormously from the opportunity to come to campus and meet Paul Muldoon,” Fox says. “Moreover, it would be a wonderful opportunity for Wit to use our world-class library and to interact with our faculty and students. I knew that we at the Keough-Naughton Institute would benefit as well from Wit’s perspective on Muldoon and any number of contemporary literary and historical themes.”

On his part, Pietrzak was thrilled to receive the invitation.

“Paul Muldoon is the major poet writing in the English language,” he says. “We’ve had keen interest in his poetry in Poland and keen interest as well from a Polish press about publishing a book of selected poems. That makes my current project –a critical analysis of Muldoon—even more timely.”

For research for his Muldoon monograph, Pietrzak used his two weeks at Notre Dame to immerse himself in the Irish Studies collection of the Hesburgh Library. With the assistance of Irish Studies Librarian and Keough-Naughton Faculty Fellow Aedin Clements, he delved into a collection he calls “stupendous.” In addition to the library’s collection of Muldoon analysis, a particular treasure was the file Clements supplied of yet-uncatalogued Muldoon materials, including interviews with the poet and the typescript of the poem “The Bangle (Slight Return),” later published in Muldoon’s 1998 volume Hay. 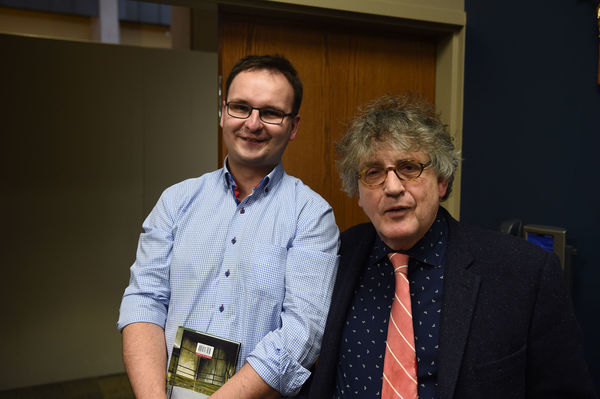 Of course, the real delight was meeting Muldoon himself and discussing both the possibility of Pietrzak translating his poetry into Polish and his theories on the notion of empathy in Muldoon’s poetry. Pietrzak identifies one particular example of this theme of empathy in a poem titled “The Loaf.”

“By investigating something as mundane as the opening for a dimmer switch in a house in New Jersey undergoing renovation,” Pietrzak says, “Muldoon leads us through an investigation of the laborers who built the house—probably Irish laborers—and brings us into an entire panorama of the construction of the eastern seaboard of the United States:

of the canal after a hurricane

and the spots of green grass where thousands of Irish have lain. . .

Thus, in Muldoon’s poetry, apparently insignificant objects open up an entire history of the Irish.”

Before returning to Łódź, Pietrzak reflected on the connection between Ireland and Poland:

“We share with the Irish a history of rebellions, particularly rebellions that are lost. The ties between Ireland and Poland, of course, extend beyond that, as both nations were subjugated by foreign powers and both became independent at approximately the same moment (Poland in 1918, Ireland in 1921). Since Muldoon’s poetry reflects some of the divisions within the Irish society and looks to a vaster panorama of tensions between various ideas of identity, he strikes an immediate note in the Polish imagination, which is also torn between nativist traditionalism and more malleable perceptions of what constitutes the Polish self.” 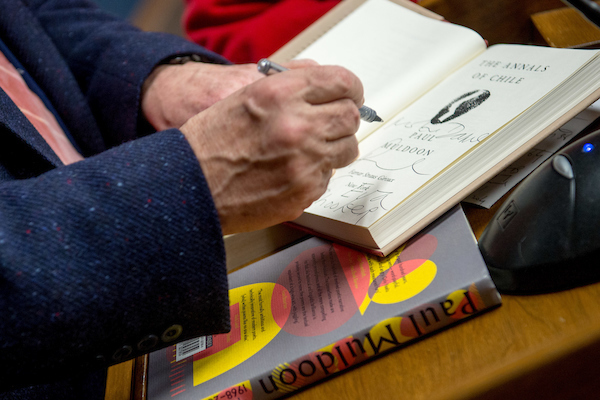 Paul Muldoon signing a volume of his poetry